Understanding the Facts and Figures of Ocean Pollution

by Chris Riley Updated on November 18, 2021. In nauticalknowhow

Ocean pollution is a harmful side-effect of our land-based activities, and if we don’t work hard to keep our oceans clean, the future of our planet will look very bleak indeed. Since our oceans are such an important feature of the planet’s eco-system, unhealthy seas make for unhealthy residents. That’s why it’s essential for us all, as boaters and as human beings, to rethink the way we use our oceans and to learn about how harmful substances can have drastic effects on our marine environments.

Right now, we have time to reverse the damage done to our oceans, but only if we act quickly. To help fight the good fight against marine pollution, it pays to know your enemies.

The Different Types Of Pollution 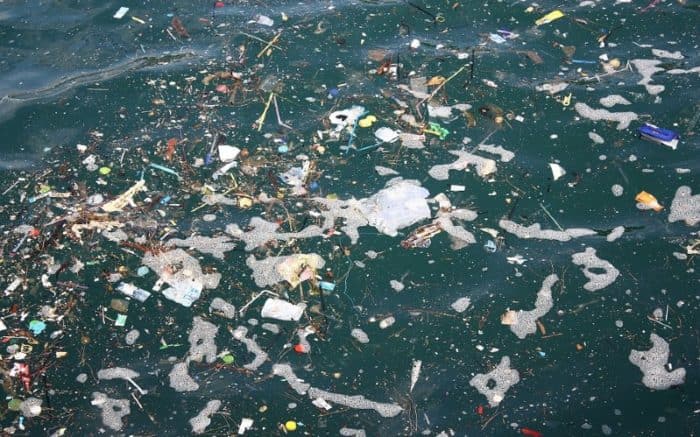 Plastic is arguably the most famous and well-documented type of marine pollution. Every year, we dump around eight million metric tons of plastic waste into our oceans. In pounds, that’s approximately 17.6 billion lbs. And we do this every year. Scientists predict that by 2050, ocean plastics will outweigh all of the fish in the sea.

This plastic isn’t just from obvious sources such as the careless disposal of litter. In fact, a single laundry load is enough to flush more than 700,000 plastic microfibers into our waterways, which will eventually find their way into the planet’s oceans.

Estimates have suggested that these fibers are responsible for up to 85% of all beach garbage. They don’t break down like organic materials, such as cotton or wool, and these seemingly innocuous fabrics could bring lasting damage to our waters. The effects of plastic on ocean life can be devastating.

Thousands of marine animals die every year from consuming marine plastics. Over 50% of all sea turtles have traces of plastic in their systems and that number continues to rise. One million seabirds die of ocean pollution per year. Countless more will be poisoned by chemicals either spilled directly or leaching from plastics.

In the last century, 15 marine species have gone extinct. There are 72 more than have been listed as critically endangered. Some estimates guess that as many as 700 species are vulnerable to extinction because of marine plastics. This would devastate the ecosystem. As lovers of the outdoors and responsible boaters and anglers, this should concern every single one of us.

When large oil tankers leak, it causes terrible destruction to our seas. However, oil spills actually count for a very small percentage of the oil that pollutes our oceans, with some figures estimating that spills are only responsible for around 12%. The rest comes from our activities on land.

More than three times as much oil is estimated to arrive in our oceans from our land-based activities. This comes in the form of oil runoff from roadways, pollution coming downstream in our rivers, and from our households too.

You’ve seen the devastation caused by oil spills and chemical runoff, but a large portion of ocean pollution is caused by natural plants that experience unnatural growth. Agricultural nutrients are often dumped in the oceans. In the grand scheme of things, adding nutrients to the ocean doesn’t appear to be harmful on paper, but the results can be devastating.

By adding large amounts of excess nutrients, such as nitrogen, rapid growth of certain algae species can take over vast swathes of the ocean. As the algae spreads it can remove life-giving oxygen from the water, suffocating life. Marine life can literally be choked to death.

Light pollution is an unexpected threat to marine life and one that’s often overlooked. Light, at the wrong place and the wrong time, can have devastating effects on marine wildlife. Newborn turtles can fail to orient themselves correctly and never reach the ocean; life-giving plankton can disappear; and migration and mating habits of marine fauna can be disturbed.

Another unexpected threat that could increase light pollution is the thinning of arctic ice. Many species of marine life operate in darkness, and thinner ice sheets will allow more sunlight to penetrate, as well as invite ice breakers and fishing vessels to operate. With brighter light and warmer waters, marine species dependent on the darkness will migrate, upsetting the delicate food chain and connected ecosystems.

Another overlooked pollutant is noise. Between 1950 and 1975, the ambient sound level in one area of the Pacific Ocean by as much as 10 decibels—a tenfold intensity increase. Sound level in the ocean is only getting louder as shipping increases, as oil exploration becomes more invasive, and as sonar becomes more advanced.

Man-made sounds force marine life to “speak” louder to each other in a bid to be heard. This leads to a shouting match that gradually increases the natural “speaking” volume of marine ecosystems. Loud noises are particularly damaging to invertebrates such as jellyfish, which play an important role in the ocean’s food web.

The most alarming features of marine pollution are the growing garbage patches that choke our oceans. Currently, there are five giant marine garbage patches. The largest is known as the Great Pacific Garbage Patch. This shameful area is littered with an estimated 1.8 trillion pieces of plastic marine debris, spreading across the surface of the ocean in an area approximately twice the size of Texas.

These patches form because of rotating ocean currents called gyres. Essentially what happens is the ocean is spinning over a very large area with enough force to create giant trash piles. The name is misleading however and many people expect to see a floating island made of trash. In fact, it is very loosely dispersed. There are four particles per cubic meters in the patch. That means, from a satellite or Google Earth, you’d see nothing. Because it’s so hard to see, it’s also hard to motivate people to do anything about it. It doesn’t look like a problem. But, as you’ve read, it very much is.

The majority of polluting plastics come from China and Indonesia, with the two countries accounting for a third of the plastic pollution. 20 countries provide 80% of the ocean’s plastic pollution, and the United States is one of those countries.

Underwater, the situation is worse. Experts estimate that 70% of all ocean trash sinks to the bottom, making it invisible to our eyes. There, the plastics can be eroded into smaller pieces, known as microplastics, which cause even more devastating problems. Microplastics can enter the food chain.

Microplastics can take up to 400 years to degrade. These plastics can degrade into harmful chemicals that can contaminate the sea, or they can erode into smaller pieces that can be ingested by living organisms and enter the food chain. A single piece of microplastic can be swallowed by small marine animals, working its way up the food chain, from species to species, from fish to marine mammals, and so on, until it enters the human body.

Even individuals that care little for the environment must take a moment to think of their own well-being. By harming the ocean, you could indirectly be harming yourself.

But there’s more to the food chain disruption than human concerns and the amount of plastic in oceans.

As mentioned above, dead zones are crippling the ocean’s biodiversity. These dead zones, known as hypoxic zones (areas with dangerously low oxygen concentrations), are increasing in number. A study from 2004 saw scientists identify 146 hypoxic zones. Four years later, in 2008, that number rose to 405. That number continues to grow, and the size of these zones continues to expand. In 2017, scientists identified a large hypoxic zone in the Gulf of Mexico that was reported to be almost the same size as New Jersey.

As these suffocation-prone areas grow, animals and their delicate eco-systems don’t stand a chance.

Poor undersea oxygen levels are exacerbated by air quality above the surface too. Greenhouse gas emissions are fueling ocean acidification. Acidic oceans threaten clam, oyster, and mussel populations. The water quality prevents them from making strong shells, causing premature death. This can have catastrophic effects on the food web.

Marine Pollution: How You Can Prevent It 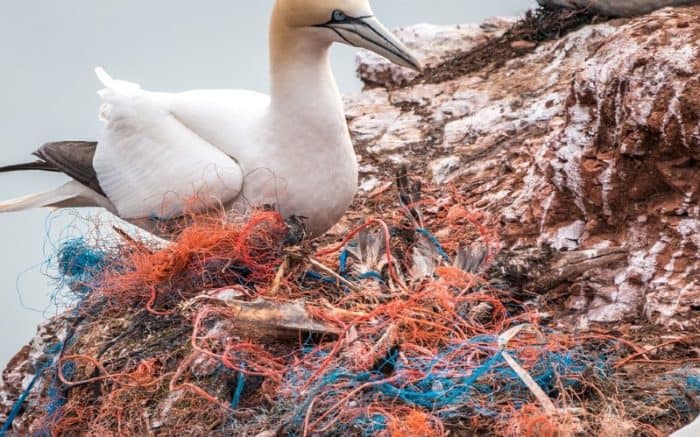 Luckily, it’s not all doom and gloom just yet. There is still time to help if we act fast enough. Here’s what you can do to help save the planet’s oceans.

Be mindful of your water usage. Water runoff is one way that harmful pollutants can reach the ocean. By using less water, you’re already preventing some dangerous chemicals from entering the ecosystem.

Think twice before you throw something away. It might be more environmentally friendly to recycle, upcycle, or repurpose your trash instead of sending it on a path that may lead to the ocean.

Consider swapping out harmful pollutant chemicals with eco-friendly alternatives. The environmental damage caused by chemicals is staggering, especially from pesticides and your marine cleaning products.

Since we’re trying to prevent an ocean of plastics, try to avoid buying products wrapped in the stuff. Also, shop with your own grocery bag and never use single use plastic bags again!

A lot of people made fun of the bans on plastic straws when they happened. When you see videos of rescue workers trying to pull one out of the nose of a sea turtle that’s dying because it can’t breathe, it puts it in some perspective, though. If we want to continue to enjoy the oceans and marine life, we have to make some changes.

Your vehicle can, directly and indirectly, harm the marine environment. Motor vehicles inevitably leak fuel and oil, which can be fed into the ocean. Similarly, the emission of greenhouse gases can upset marine ecosystems too.

The production of electricity can be damaging to marine environments. While you can’t stop a power station from operating, you can reduce your electricity consumption to stop the construction of more of them.

Consider “catch and release” fishing to help keep the food web in balance. Or, fish considerately in the appropriate seasons when fish stocks are higher than average.

Practice safe boating. Follow the rules and regulations from your marina, anchor appropriately, and never litter. We have more about clean boating here.

This has only come to people’s attention in the last several years. Many products, especially facial scrubs and other exfoliating shower gels, include microbeads. These are just very small plastic fragments. Essentially they’re exactly what people are worried about in the oceans already. Normal sized plastic will degrade into microbeads over time. These leach chemicals and can harm marine life. Look for anything with polyethylene or polypropylene on the ingredients list as that is how microbeads are often listed.

Many charities are working to help clean up our oceans. On an individual level it’s easier to prevent future waste but not so easy to clean already existing waste. Look into what organizations are working towards fixing the problems that already exist and see if you can help out.

Lastly, if you’re a boater it’s in your best interests to organize and attend waterway, beach, and lake clean-ups. By removing trash from the ecosystem, you’re actively helping to protect the ocean!