by Chris Riley Updated on November 22, 2021. In nauticalknowhow

These days a lot of slang terms come to us from the sea. Naval tradition, sailing, even piracy all created their own slang and lingo over the years. Many of the terms found their way into modern languages and are just everyday terms now. And some, as we’ll see, only seem like they have nautical origins.

A1: Not just a steak sauce, this slang term means something is high quality or the best. It comes from ship classifications. The highest rated ships were rated A1.

At Loggerheads: This term means to be locked in a disagreement. It comes from the term “loggerhead” which was a stick used to stir pitch and other hot liquids. If sailors got into a fight, they would sometimes use these loggerheads as weapons.

Barge In: Large, flat-bottom river barges are hard to maneuver. Thus, they had a bad habit of forcing their way into places where they weren’t wanted, which is where the modern meaning comes from.

Booty: Pirate booty is a phrase we’re all familiar with. It traces its origins to the word “bottyne” which was plunder taken in war.

By and Large: This term originally referred to how sails took the wind. By referred to the ability to sail into wind and large was off the wind. If a sailing ship could do both then by and large it sailed well.

Deep Six: This is used to mean getting rid of something. In nautical terms, a fathom was six feet, so you’d be dumping something one fathom, or about the height of a sailor, if you deep sixed them.

Devil and the Deep Blue Sea: This term refers to being between a rock and a hard place, as it were and this one does have a nautical origin and it does refer to the seam where the hell meets the deck. When a sailor did have to caulk this on the fly, they’d be suspended from the deck. The seam was called the devil, and the sea was right under them as they worked.

Hand Over Fist: This phrase typically refers to earning money, and means you’re pulling it in very fast. The phrase’s nautical origins refer to sailors rapidly pulling in ropes on a ship.

In the Soup: Fog is often described as being thicker than pea soup. If a boat is in the soup, it’s in the fog.

Keel Over: This slang term refers to passing out or even dying. The keel, of course, is located under a ship so for the keel to flip over the boat has to capsize. When applied to people the meaning is clear.

Knot: We knot nautical speed is measured in knots, but why? Back in the 17th century, sailors used something called the common log or chip log to measure speed. This consisted of a piece of wood used as a float at the end of a rope. Knots were tied in the rope every 47 feet 3 inches. A sailor would let these knots pass through their hands as the ship sailed, and the timing would be measured with a 30-second hour glass. The number of knots that passed through the sailor’s hands indicated speed.

Know The Ropes: Also “show you the ropes,” which means understanding how something is done. This one is fairly self-explanatory as any sailor hoping to master their ship would need to literally know the ropes and how to use them.

Limey: This is still used as a slang term, somewhat insultingly so, for British people. The phrase dates back to the British Navy providing its soldiers with rations of limes. Scurvy was a serious issue for sailors and it’s caused by a lack of vitamin C. The limes were meant to combat this.

Loose Cannon: A character in a TV show or movie is a loose cannon if they’re unpredictable. The term comes from cannons used on wooden ships. If a cannon was not secured, it would come loose on deck and could cause serious damage.

Pipe Down: This phrase means to be quiet or settle down. Boatswains would blow on a pipe to signal that it was time to head below deck in the evening. Piping down the hammocks was the term used.

Scuttlebutt: This is a term that means gossip. It dates back to sailing vessels and the literal scuttlebutt which was the term for water barrel. Sailors would gather around with a drinking ladle to chat when they had a moment free, hence its usage in terms of gossip.

Stinkpot: This is a modern term used by some boaters to refer to powerboats. In specific, the kind that race by very quickly and leave a wake of smelly exhaust.

Three Sheets to the Wind: A sheet is the line used to control a sail. One sheet left to flap in the wind would make control of the vessel harder. Three sheets means it’s downright sloppy and the sails would be all over the place. That’s why, today, the phrase refers to being drunk.

True Colors: When someone shows their true colors, it means they’re showing who they really are. In most contexts, this phrase means someone deceives you in some way but then you learned the truth. In nautical terms, some vessels would hide their flags or colors, and even fly the flags of enemies in order to trick people, especially in battle. If they had shown their true colors, the enemy would have known they were being tricked. Flying colors has the same origin.

Under the Weather: If you’re feeling ill, people will still use this phrase. It comes from the days of sailing when an ill sailor would be sent below deck. That kept you out of the weather which could make the situation worse by placing you literally under the weather. 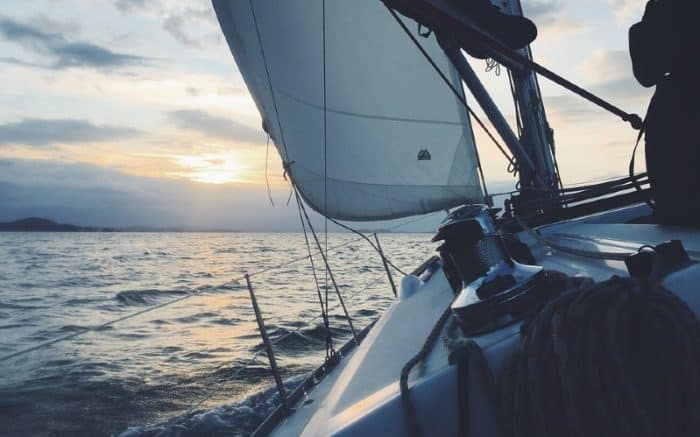 Words and phrase origins are often steeped in myth, legend, and outright hoaxes. A lot of terms that allege to come from nautical origins are actually not nautical at all. You’ll find many websites that claim these stories as true origins. It’s always good to do a little extra research just to be sure.  Like these popular ones.

Above Board: we use this term today to mean something that is honest or honorable. Some people claim it has a nautical origin. That a crew that stayed on deck was honest and, literally, above board. But if they were pirates they might hide below deck. This is not true, however, and the term traces its origins to gambling, not piracy.

As the Crow Flies: A popular story relating to this term is that vessels had crows in cages on board and would release one to see what direction it flew and then follow it to land. There is no evidence that this ever happened, however. Keeping birds alive in a cage would have been difficult, especially crows since they will fight each other.

Brass Monkey: A popular story is that pirate ships used to call the brass trays that held cannonballs brass monkeys. If it got cold enough, the metal would contract and the balls would fall off. However, that’s not actually true. Sailors never actually used the term “monkey” or “brass monkey” to describe anything on a ship. Also, cannonballs were never stored up on deck.

Buoyancy Operated Aquatic Transport: Ever heard this as the origin of the word “boat?” It’s not. That’s from a cartoon.

Clean Slate: People attribute this, meaning a fresh start, to sailors very often. However, the idea of a clean slate is literally as old as slates themselves. The Ancient Greeks had a concept called “tabula rasa” in philosophy which essentially translates to clean slate. Schools used to use chalk and slate before paper notebooks and every day those slates had to be cleaned. The phrase does not have any notable link to nautical history.

The Devil To Pay: This is a fun one that is often explained wrong. On a ship, the devil referred to the seam of the hull at deck level. Word is that this was the hardest of all seams to caulk, hence calling it the devil. The devil to pay meant caulking that seam. However, that is not the phrase origin. It looks more like sailors took the already existing phrase and used it to describe what they were doing. The true phrase predates nautical use by over 100 years. There is a lot of history of terms relating to people making bargains with the devil that require payment, including the very famous story of Faust.

Posh: A word used mostly in England to describe something fancy or expensive. There’s a story that it comes from ships that travelled from Britain to Boston. The rich customers were put in rooms labelled “port out, starboard home” as an instruction on where to store their luggage so it wouldn’t be ruined by the sun. This, however, is untrue.

Square Meal: This is another popular one from folk etymology. The story goes that sailors were fed on square plates thus the origin of square meal. And it’s true that the Royal Navy used square plates. However, the phrase was never recorded anywhere in naval history. But the word “square” meaning “good” or “proper” or “trustworthy” dates back hundreds of years. The first usage of “square meal” in print comes from US sources in advertisements.

The Whole Nine Yards: There are many supposed origins of this phrase, but one claims to be nautical. It suggests that square-rigged vessels with three sails on three masts had “the whole nine yards” out when all sails were up. However, there is no evidence to support this and it also doesn’t make much sense. Not all vessels had three sails or three masts.