by Chris Riley Updated on August 20, 2019. In nauticalknowhow 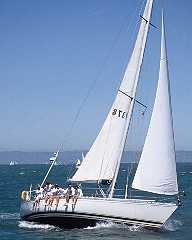 Propelling boats with sails has been going on for thousands of years. In the old days the sailors had very little control and most sailing was done downwind or with the wind pushing on the sails in order to move the boat. More recent technologies have made sailing, especially racing, much more controlled and allows boats to sail closer and closer to the wind. As a rule of thumb, a recreational vessel probably will only be able to sail in areas that are at least 45 degrees off the wind on either side of the direction from which the wind is blowing. This is called the “no go zone” and to get to a location upwind you have to do a maneuver called a tack. This back and forth maneuver with the bow going through the wind and the sails being transferred from one side to the other eventually gets you to your upwind mark.

How do boats sail?

A sailboat has four basic components which allow it to sail. They are the hull, the sail(s), the keel or centerboard, and the rudder.

The hull is obviously designed to carry crew, equipment, rigging (mast, spars, etc.) and move through the water with ease.

The sails actually provide the force to make the boat move through the water. To imagine a sailboat going away from the wind or having the wind push on the sails is fairly straight forward. It is more difficult, however, to understand how a boat sails toward the wind. In actuality sailboats cannot sail directly into the wind. As mentioned above there is a “no go zone” in which the sails provide no power to move the boat; they simply flap in the wind.

The force that the wind transfers to the sails actually makes a boat move forward for much the same reason a plane flies. If you were to look down on a sailboat from a helicopter you would see what looks like an airplane’s wing except standing on end. The air moving across the sails, like air moving across an airplane wing, creates lift. The keel or centerboard keeps the boat from being pushed sideways by the wind. The resistance from the hull and the keel translate the lift to forward motion. You do also get some sideways motion or leeway.

The rudder is used to steer the boat. You may have an extension attached to the rudder called a tiller. When the tiller is moved to one side the rudder moves and the force of water flowing over the rudder causes the boat to turn. You should remember that on boats with tillers you must push the tiller in the opposite direction that you want to turn. On larger sailboats with wheel steering the boat turns the same way that the wheel is turned.

Each direction that a sailboat sails has a name that describes it. All sailing terminology has been developed in order to quickly and succinctly communicate with the crew what procedures should be performed in order to sail the boat effectively. The closer to the wind the boat comes the tighter the sails. Conversely, the further off the wind, the looser the sails.

Rules of the Road

In order to understand the rules of the road as they pertain to sailboats you must know a little more sailing terminology.

When sailboats approach one another under sail, the “give-way” vessel must stay clear of the “stand-on” vessel. The following rules determine which boat is the “give-way” and must yield the right-of-way in any situation where the danger of collision exists.

If both boats are on the same tack, the boat to windward must keep out of the way of the boat to leeward. In other words the boat farthest from the direction from which the wind is blowing has the right-of-way.

Generally, sailboats have the right-of-way over power boats unless the sailboat is overtaking another vessel. In that case the sailboat becomes the “give-way” boat. Additionally, if a sail boat has mechanical propulsion and it is being used the sail boat, even while still under sail, is suddenly a power boat and must obey the same rules as other power boats.

Even though a sailboat may have the right of way over a power boat some common sense must be used. For instance, you should not impede the passage of large power boats and you should not change course when approaching power boats. Changing course only makes it harder for the power boat to pass safely.