by Chris Riley Updated on December 22, 2021. In nauticalknowhow

If you’re new to boating it can be overwhelming to get a grip on all the extra gear you need and/or want. You may wonder if something like a VHF radio is even necessary. Especially if you have a good quality cell phone with good coverage.

The Coast Guard does not advocate cell phones as a substitute for the regular maritime radio distress and safety systems recognized by the Federal Communications Commission and the International Radio Regulations — particularly VHF maritime radio. However, cell phones can have a place on board as an added measure of safety. When it’s a matter of safety, it’s always better to be overprepared on the water. Let’s take a look at what cell phones and VHF radio have to offer.

Why Cell Phones Have Limitations in Emergencies

Cell phones generally cannot provide ship to ship safety communications or communications with rescue vessels. If you make a distress call on a cell phone, only the one party you call will be able to hear you.

We’re accustomed to this kind of service on land and there it makes sense. If you have an emergency you call the police, fire department or ambulance and get a direct line. But things work more precariously on the water.

Most cell phones are designed for a land-based service. Their coverage offshore is limited, and may change without notice. Most everyone has experienced communications out to about 25 miles at times. Yet at other times they could not get through to a land based phone inside of 10 miles from shore. This might well create a communications problem in the event of an emergency at sea.

Locating a cell caller is hard to do. If you don’t know precisely where you are, the Coast Guard will have difficulty finding your location on the water. A properly set up VHF radio can send an emergency signal on a regular basis. This will have your vessel’s information encoded into it as well as GPS coordinates.

Remember, one of the most important differences between a land based emergency and a water based one is location. Your house is not going to move in an emergency but your boat is. If you can’t provide your updated location, the Coast Guard or other rescuers may spend hours looking for you. Strong currents and storms can push you far from the location of your initial emergency.

In an emergency situation, using a cell phone is not always practical. If the boat is on fire or sinking, you may not have a hand free to operate a phone, or you could easily lose it. Few if any cell phones are designed for use in water. If it sinks, it’s done with.

Note: In some areas, however, cell providers have established a special code (*CG) which, if you are in range, will connect you directly to a Coast Guard Operations Center. This service may only work with the carrier to which you have subscribed. 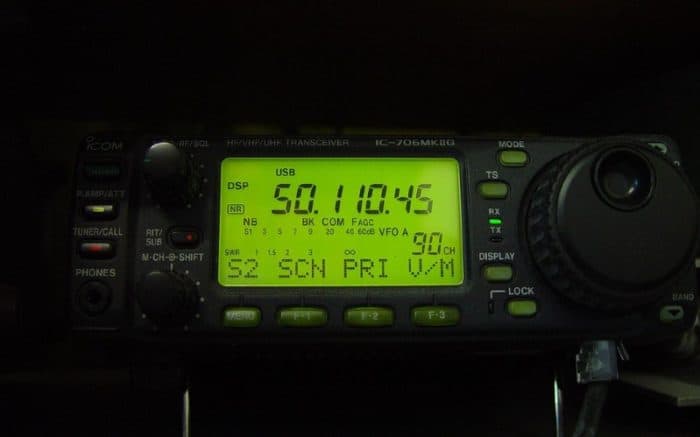 Nearly all fixed mount VHF radios sold in the last 15 years or so include digital selective calling, or DSC. A VHF radio equipped with DSC provides some incredible benefits in terms of emergency use on the water.

DSC capability offers up single button emergency alerts. It operates as part of the worldwide distress system. With a button push a distress alert can be transmitted to alert the Coast Guard and other vessels of a problem. This includes a list of 10 pre-programmed potential emergencies which include;

DSC will reliably alert rescue personnel and will send the digital information about your vessel, including GPS coordinates, and it will continue to send this information until you receive a response or end the message. Once hooked up to your GPS, it does this automatically and hands free, making it invaluable. Once the alert has been transmitted it automatically tunes your radio to emergency channel 16 so you can communicate.

DSC alerts not just the Coast Guard but all vessels in the area. This is a huge advantage over just using a cell phone. And, remember, using a phone means you need to know the number of the nearest Coast Guard shore stations. If you just call 911, they have to relay your information to the Coast Guard, assuming you’re close enough to get through. It’s an added step and added time when time is of the essence.

Additionally, DSC allows you to make ship to ship calls if you know the direct number of another vessel. When registered, ever DSC capable radio gets an MMSI or Maritime Mobile Service Identity that works much like a phone number. 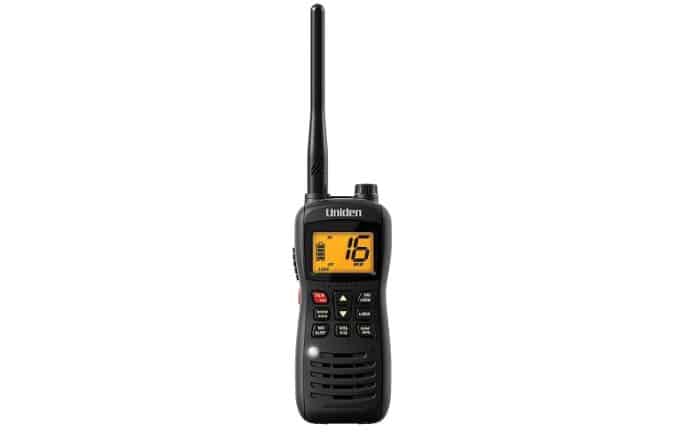 Cell phones do provide the convenience of simple, easy-to-use, inexpensive, private and generally reliable telephone service to home, office, automobile or other locations. Placing a shore-to-ship call to someone with a cellphone is especially convenient. However, you usually cannot use your cell phone outside the United States, and you may need a special agreement with your carrier to use it outside that carrier’s local service area.

If you’re boating in international waters, the roaming charges alone could be staggering. The last thing you want is to end up with a phone bill of hundreds or even thousands of dollars.

VHF marine radios were designed with safety in mind. If you are in distress, calls can be received not only by the Coast Guard but by nearby vessels which may be in position to give immediate assistance. A VHF marine radio also helps ensure that storm warnings and other urgent marine information broadcasts are received. The Coast Guard announces these broadcasts on VHF channel 16. Timely receipt of such information may save your life. Additionally, your VHF marine radio can be used anywhere in the United States or around the world.

When using VHF radios on an open band, however, conversations are not private and individual boats cannot be assigned a personal phone number. If you are expecting a call, channel 16 or the marine operator’s working channel must be continually monitored.

This is where a DSC radio take up the slack. You can listen to the emergency channel and receive warnings or updates. But you can also make direct and private calls. Thus, the old drawbacks of standard radio are effectively eliminated.

In a serious emergency on a vessel, a VHF radio can prove to be far more durable and reliable. Many handheld VHF radios include lights to keep them visible in rough weather. They may also float as well and operate in extreme wet conditions. Obviously none of us want to have to use a phone or a radio in these conditions. But if you do have a man overboard or in a sinking situation, this could literally be the difference between life and death.

Should You Rely on Just a Cell Phone? 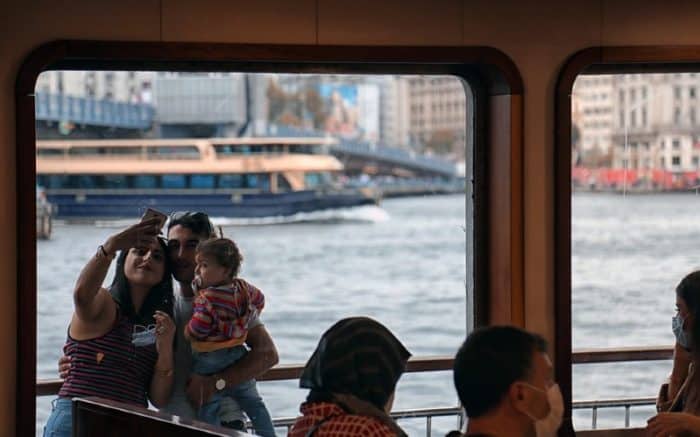 Actually there is no comparison between cell phones and VHF marine radio. They really do provide different services. The cell phone is best used for what it is, an on-board telephone — a link with shore-based telephones. Use your cell phone for exactly what you use it for now. Play some games with it, call home if you need to touch base, text a friend. But as a tool, which is what a VHF radio is, it’s not really in the same ballpark.

A VHF marine radio is intended for communication with other ships or marine installations — and a powerful ally in time of emergency. If you are boating very far off shore, a cell phone is no substitute for a VHF radio. The range is not there and the features don’t match up.

That said, a cell phone is always a potential second layer of security. If something were to happen to your VHF radio, a cell phone might still save the day. But it should not be your first line of defense because it’s not intended to work that way and could potentially leave you stranded.

What Kind of VHF Radio Do You Need? 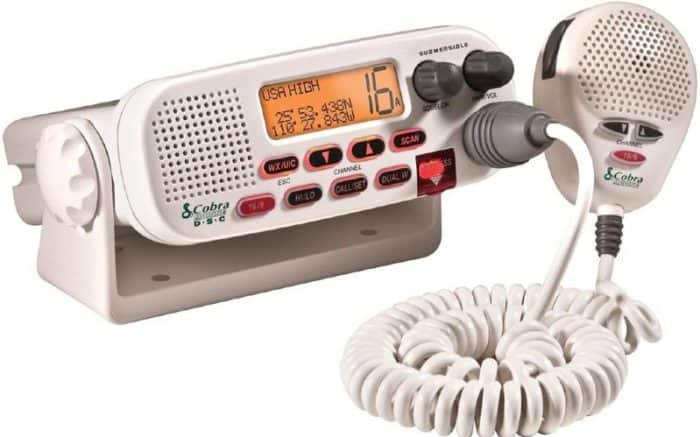 As we said, any radio made in the last 15 years will have DSC capabilities. You can check out the full benefits of DSC radio technology in our article here. These benefits only work if you set your radio up, however. There are countless boaters who either don’t register their radio or don’t hook it up to their onboard GPS. In many ways this is like driving a car without using your seatbelt. If you know it can save your life, why wouldn’t you do it?

Aside from ensuring your radio is properly set up and registered, there are some features that will definitely set it apart for you. This is especially true for handheld units.

You’ll want a VHF radio that has a rechargeable battery with a solid battery life. You should expect at least 10 hours of operation at full charge, but look for 15 to 20 hours or more when possible. Make sure the charge is indicated on a display somewhere so you know what’s left.

Always get a backup battery as well that you keep charged and ready to swap out when need be. A lot of casual boaters won’t do this, especially when they see that a battery has 20 hours of life. That sounds like forever, right? And sending a distress call just takes minutes. But remember, in a bad emergency, the Coast Guard may not find you in minutes or even hours. People have been stranded at sea much, much longer in the most dire cases. Hope for the best but prepare for the worst.

Most good quality VHF radios are able to monitor NOAA weather alerts. Make sure yours does as well. Cheaper versions you buy online may not have this feature.

Look for a high wattage. Many VHF radios let you transmit over different power ranges. As low as 1 watt for standard transmission but higher wattage for distress calls. Many radios offer a power range for distress calls that is 5 watts to 8 watts. The maximum is usually 6 watts which can give you a range of around 20 miles depending on conditions. Keep in mind, a higher wattage drains battery power more quickly.

Cell phones and marine radios are truly two different things. They work in different ways and they perform different functions. Are there similarities? Of course. And in a pinch you can do your best with either one to call for help. But just like a gold cart and a Ferrari do basically the same job, there are clear differences in how they do it. And you can get a feel for which one is better pretty quickly.

Register your VHF radio right away. Make sure it’s linked to your GPS. Keep your cell phone around just in case, but use it as a back up and not a first line of defense. As always, stay safe and have fun.