What Does SOS Mean?

by Chris Riley Updated on May 28, 2021. In nauticalknowhow

What is the Meaning of SOS?

Harmony asks “Do the letters in the term SOS represent three words? If so could you let me know what they are?” Thanks to Neal McEwen for allowing us to use information from his article “SOS”, “CQD” and the History of Maritime Distress Calls .

There is much mystery and misinformation

surrounding the origin and use of maritime distress calls. Most of the general populace believes that “SOS” signifies “Save Our Ship.” Casual students of radio history are aware that the use of “SOS” was preceded by “CQD.” Why were these signals adopted? When were they used?

So, what does SOS stand for? Absolutely nothing.

If you’ve been wondering “what does SOS stand for?” the truth is that it doesn’t stand for anything. The Morse Code is a line of three dots, three dashes, and three more dots. It’s designed to be easy to communicate. It just so happens that three dots also means “S” and three dashes means “O” in the Morse Code alphabet. It’s just one of those convenient accidents.

Or is it? The SOS Morse code conveniently means nothing else, so it messages can’t possible get confused either. How about that?

The practical use of wireless telegraphy was made possible by Guglielmo Marconi in the closing years of the 19th century. Until then, ships at sea out of visual range were very much isolated from shore and other ships. The wireless telegraphers used Morse Code to send messages. Morse Code is a way of “tapping” out letters using a series of dots (short signals) and dashes (long signals). Spoken, short signals are referred to as “dih” and long signals are referred to as “dah”. The letter “A” is represented by a dot followed by a dash: 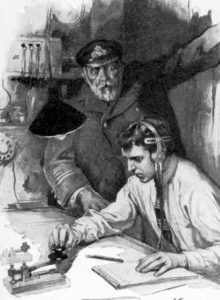 By 1904 there were many trans-Atlantic British ships equipped with wireless communications. The wireless operators came from the ranks of railroad and postal telegraphers. In England a general call on the landline wire was a “CQ.” “CQ” preceded time signals and special notices. “CQ” was generally adopted by telegraph and cable stations all over the world. By using “CQ,” each station receives a message from a single transmission and an economy of time and labor was realized. Naturally, “CQ,” went with the operators to sea and was likewise used for a general call. This sign for “all stations” was adopted soon after wireless came into being by both ships and shore stations.

In 1904, the Marconi company suggested the use of “CQD” for a distress signal. Although generally accepted to mean, “Come Quick Danger,” that is not the case. It is a general call, “CQ,” followed by “D,” meaning distress. A strict interpretation would be “All stations, Distress.”

At the second Berlin Radiotelegraphic Conference 1906, the subject of a danger signal was again addressed. Considerable discussion ensued and finally SOS was adopted. The thinking was that three dots, three dashes and three dots could not be misinterpreted.  It was to be sent together as one string.

The Marconi Yearbook of Wireless Telegraphy and Telephony , 1918 states, “This signal [SOS] was adopted simply on account of its easy radiation and its unmistakable character. There is no special signification in the letter themselves, and it is entirely incorrect to put full stops between them [the letters].” All the popular interpretations of “SOS,” “Save Our Ship,” “Save Our Souls,” or “Send Out Succour” are simply not valid. Stations hearing this distress call were to immediately cease handling traffic until the emergency was over and were likewise bound to answer the distress signal.

Although the use of “SOS” was officially ratified in 1908, the use of “CQD” lingered for several more years, especially in British service where it originated. It is well documented in personal accounts of Harold Bride, second Radio Officer, and in the logs of the SS Carpathia, that the Titanic first used “CQD” to call for help. When Captain Smith gave the order to radio for help, first radio officer Jack Phillips sent “CQD” six times followed by the Titanic call letters, “MGY.” Later, at Brides suggestion, Phillips interspersed his calls with “SOS.” In SOS to the Rescue , 1935, author Baarslag notes, “Although adopted intentionally in 1908, it [SOS] had not completely displaced the older ‘CQD’ in the British operators’ affections.” (It is interesting to observe that Marconi was waiting in New York to return home to England on the Titanic.)

The first recorded American use of “SOS” was in August of 1909. Wireless operator T. D. Haubner of the SS Arapahoe radioed for help when his ship lost its screw near Diamond Shoals, sometimes called the “Graveyard of the Atlantic.” The call was heard by the United Wireless station “HA” at Hatteras. A few months later, the SS Arapahoe received an “SOS” distress call from the SS Iroquois. Radio Officer Haubner therefore has the distinction of being involved in the first two incidents of the use of “SOS” in America, the first as the sender and the second as the receiver. The U.S. did not officially adopt “SOS” until 1912, being slow to adopt international wireless standards.

Today, there are numerous other ways of contacting help, including dedicated radio channels, with special transmitting devices that can call for help at the simple push of a button in the event of an accident at sea.

There you have it: a brief summary of SOS. For those who like nautical trivia, you’ve got the answers to two questions that can catch out even the most seasoned sailors:

“Which three initials comprised the distress call prior to SOS?”

“What does SOS mean?”

Try asking your boating buddies and see if their answers are up to scratch!