What is a Jon Boat?

Jon boats are flat-bottom boats with squared off bows. They are most popularly used as fishing boats and they tend to be extremely simple in their design. Though not only useable as fishing boats, it’s their flat bottom that makes them ideal for this task since they have a very shallow draft and are easy to handle which makes them ideal for fishing and navigating very shallow water, channels, inlets and so on where larger and heavier boats are unable to go

Why the Name Jon Boat?

This is arguably the most common question anyone asks after “what is a jon boat?” Why are they called jon boats? What does the name jon boat mean?

Jon boat dates back to 1894, at least that’s the first instance of the name in print, and surprisingly enough the origins of the name are not all that clear. So getting to the root of what a jon boat truly is becomes a bit of a mystery at this point.

There are three “main” theories of why jon boats have the name and it’s hard to say which is more likely or plausible than any other. So we can’t say any of these are the reason they’re called jon boats, they do have some potential

Thanks to the many shallow rivers and streams of the Missouri Valley and throughout the Ozarks, flat bottomed boats were the go-to vessel of choice in the 19th century. Rumor has it the boats were made from green wood for the purpose of simple float fishing trips down river and they were so quick, cheap and easy to make you’d take one to your destination and just forget it on the shore.

The wood of choice for these quick and easy boats was jack pine. So, as the story goes, they called these jack boats at first. Jack, you may know, is a nickname for John. The origins of that go back through different languages but suffice it to say Jack and John have been interchangeable for centuries to it’s believed that jack boats gave way to jon boats and they were popular for fishing and duck hunting because you could stand in the boat with less fear of tipping than in a traditional boat. That let them spread from the Ozark’s to all over the place and Ozark john boats became a common, every day fishing boat around the world. So that theory goes.

Another potential origin of the jon boat is a man named Charlie Barnes who was a boat builder back in 1878. Barnes built many boats and also worked as a river guide along the James and White Rivers. While his legacy as a jon boat inventor may be suspect, there are plenty of historical records from the time that indicate he was a fairly well known guy and even gave boat tours to celebrities and other wealthy clients.

Because Barnes built flat-bottom boats at a time when no one else was doing it, they became fairly well known and Barnes himself became a well known figure. So why are they called jon boats? Well, this is how the story goes.

Charlie Barnes was hard of hearing. But, in demand river guide and boat builder that he is, he has people coming to see him a lot. One of those people is a reporter who has been on the river with Charlie a lot and finally asked what the boat was that he was looking at. But Charlie misheard it as “whose boat am I looking at?” So Charlie answered “John’s boat.”

The reporter used the name in something he was writing and John’s boat became jon boat in this version of the story.

Possibly even less plausible than the Charlie Barnes story but less entertaining as well is the Scandinavian version of the origin. This one says that fishermen in various Scandinavian countries developed flat bottomed boats as an easy way to transport to and from larger fishing boats. They became very popular and one of these fishermen just named the boat after himself. His name was John. And, John being a very popular name. A lot of other fishermen did the same thing until jon boat became ubiquitous.

Those are the three most commonly shared stories about how jon boats got their names, with the Ozark jack Boat idea being the most common one I was able to find. While the origin of the name is debatable it’s well accepted that the boats were invented in and around the Ozarks in the mid to late 1800s where they quickly became the boat of choice for just about anyone interested in fishing, gigging, trapping, and even running timber and pearling which is harvesting freshwater mussels. The versatility and simplicity of the boats made them instant hits.

Early versions made from that green pine timber had squared off ends and a flattened bottom, very similar to the modern versions but much less refined, and assembled from just a few pine boards and one to three benches for seats across the center.

Early guide books for those who planned to take river trips in jon boats described them as “for use, not show. They are never graceful and trim. They are not pretty.” Surprisingly, they were also larger than modern jon boats. Boats for commercial fishing would be about 4 feet wide and up to 24 feet long while some were even larger at 6 feet wide and 32 feet long.

Characteristics of a Jon Boat

As with any kind of boat, a jon boat has some defining characteristics that let you pick it out of a crowd. There can and will be some variations, of course, but in general if you want to know whether something is a jon boat look for these specific details.

Usually jon boats are made of aluminum but that’s not always the case, just most often. You can also find fiberglass jon boats and some manufacturers will even produce them out of roto-molded polyethylene. Though they are very uncommon these days, you can also find wooden jon boats as well.

Usually jon boats are on the smaller size, around 8 to 10 feet, but you can find jon boats that get up to around 20 feet as well. They’re best suited for one to three people but you can get 5 or more in some of the mid-sized boats and 6 to 10 people in boats that top out around 20 feet. Since one of the benefits of a jon boat is the fact it’s lightweight and portable, larger sizes don’t make a lot of sense for the casual fisherman who’s just out on his own. Also, the larger your jon boat gets the more difficult to manage it becomes. Because of the flat bottom, if it stretches too long and you’re sitting at the back with the motor it becomes a lot easier to unbalance the boat and flip the bow up. So larger jon boats become a little more elaborate in their design and configuration.

The smallest jon boats may only weigh a bit over 100 lbs while a 20 foot long jon boat would probably weigh around 1,200 lbs.

Jon boats are not designed or intended for anything powerful on the water, so you won’t find one with a 350 hp outboard by any means. In general a jon boat probably operates with either a trolling motor or a very low power outboard motor on the smaller end of the scale..

Larger jon boats, ones that range from 14 feet to 20 feet, will need more powerful engines and can range from 20 hp to 120 hp, depending on size and configuration. These larger jon boats tend to be a little fancier than the smaller ones and will require the ability to handle more weight in terms of people and gear, so the extra horsepower is necessary.

You only want as much power in a jon boat as is necessary to move it at a reasonable speed from one place to another given its weight. Because you’ll be fishing likely in shallow waters, excess speed is mostly unnecessary.

The bottom of a jon boat is flat to allow you to enter shallow waters. How shallow is going to depend on the draft of your boat and the shaft length of your motor. For most boaters, getting into two foot deep water is a cakewalk and even water that is a foot deep may be simple as well. It’s possible to go even shallower but, again, that depends on the weight of your boat and you in it, the motor and so on. Suffice it to say a jon boat generally has a very shallow draft and should allow you into some unique places many other boats can’t reach.

Jon boats typically have a bench or two of even just a single seat from which you can go fishing. The benches in jon boats are often pretty bare bones, just a literal cross beam from one side to the other that can support the weight of someone sitting on it and little else. As jon boats increase in size, more seating is included to accommodate the extra passengers but it’s typically nothing all that fancy – benches or fishing chairs.

The thing about a small jon boat is that it doesn’t have anything in it. It’s just space. So if you need to stow a tackle box or a rod you just drop it down on the floor, really. You can always add rod holders or something similar afterwards, if you want to spruce things up a bit but, in general, a jon boat doesn’t have any specific storage.

Larger jon boats are designed with more fishing in mind and will include storage space, racks and so on.

The range in jon boat sizes also means there’s a good range in potential prices. You need to factor in things like materials and whether the jon boat you’re looking to buy is brand new or has been used. A used boat will always be cheaper and may be a good investment as jon boats can hold up pretty well and I’ve seen some good deals on quality boats that are just a few years old.

A jon boat is a pretty simple but versatile fishing boat that doesn’t come with a lot of bells and whistles and is designed for calm and shallow waters. To meet the definition of a jon boat it needs to have a flat bottom and the front end should be square. You can get jon boats that have V-shaped modifications on the front which allows the boat to cut through waves more easily but doesn’t allow the angler to sit as high in the water as a result, so it’s a bit of a trade off on whether this is a better feature or not. Many anglers prefer the v-shaped hull but not all.

The origin of the name and why jon boats are called jon boats remains something of a mystery, though it does seem clear that they were developed in the Ozarks in the mid to late 1800s and saw great use for a number of tasks related to fishing along the rivers there. Their simple and cheap design meant they could be built just for single use travel and then discarded once people reached their destinations. 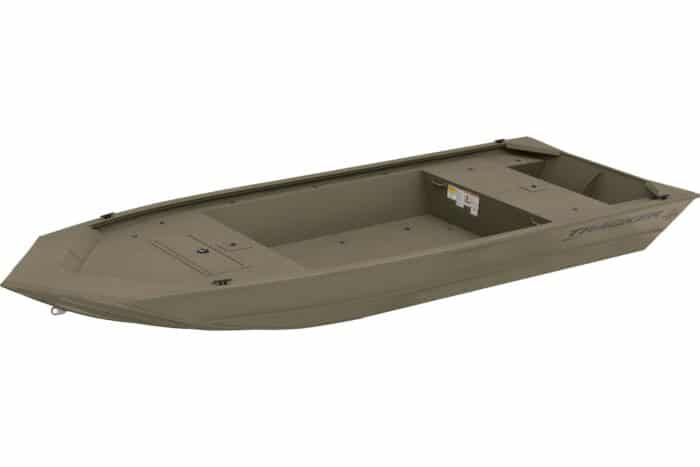