Tritoon boats are a kind of pontoon boat that has three pontoon tubes rather than the standard two tubes you’ll find in a traditional pontoon. There are some key differences between the two that are worth understanding, especially if you’re considering purchasing one. 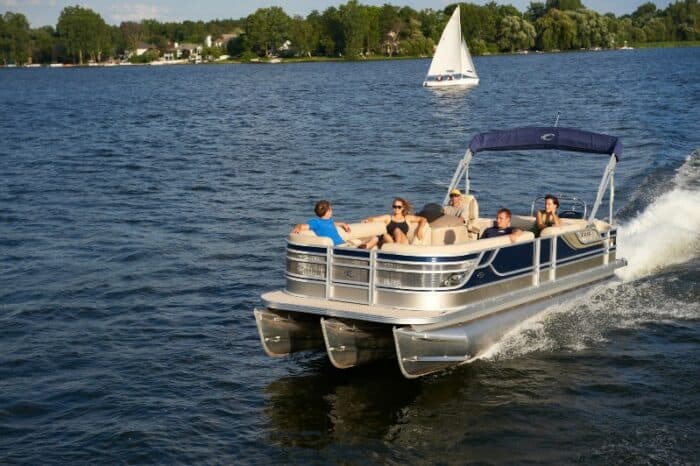 In general, above the pontoons, you’re not likely to notice any big difference between a twin tube pontoon boat and a triple tube pontoon boat. Both are known for their increased deck space over other kinds of boats.

Tritoon boats feature three tubes or pontoons beneath the hull. One central tube is flanked by two air tubes on either side that are able to offer exceptional buoyancy to the vessel. Pontoons are usually made of aluminum and chambered so that even if a hole were to form in one part, the other chambers are sealed off and the pontoon is still able to keep the boat afloat.

Tritoon boats can be larger than pontoon boats with average sizes ranging from 20 to 30 feet. That means a larger storage space and more passengers.

A traditional pontoon boat has two pontoon tubes, one on either side of the boat while the middle is open. Older pontoons had some clunkier looking tubes and you can even make your own makeshift pontoon boat with something as simple as empty steel drums or oil barrels. Inflatable pontoon boats are also an option.

Pontoon boats are available in smaller sizes than tritoons usually, from about 15 feet to 27 feet, with even tinier versions available sold as mini toons. 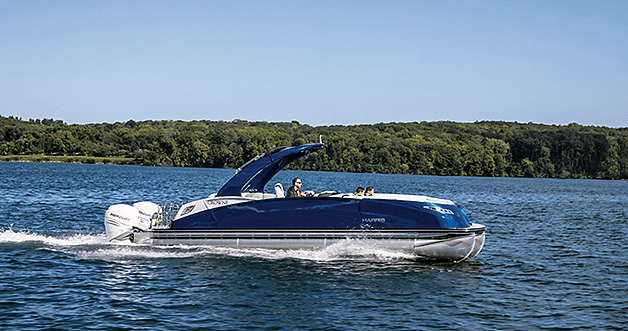 One of the biggest differences between pontoons and tritoons is how they hit your wallet. A new pontoon boat will of course be more expensive than an older, whether pontoon or tritoon.

Because tritoon boats are often bigger, have more powerful engines, and of course have the extra pontoon, they cost more. Though the range is exceptionally large from cheapest to most expensive, expect your average tritoon boat price to be anywhere from $30,000 to $50,000.

Pontoon boats have been around much longer than tritoons. Because they have fewer tubes, can be smaller, and use smaller engines sometimes, their procie reflects that. Though some luxury pontoons can still be very expensive, expect average pontoon prices to be $20,000 to $40,000. 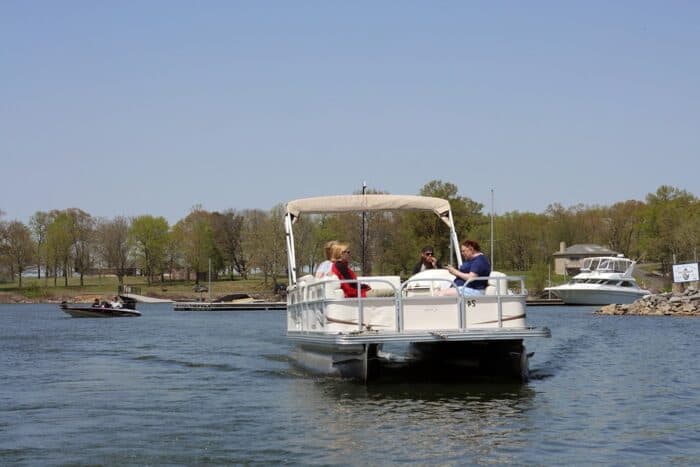 As I’ve said before, pontoon boats are not necessarily the boats you buy to win races or hunt down trophy fish. They’re more for recreation and leisure. That said, you can still get solid performance out of both pontoons and tritoons. Some fast pontoon boats do exist.

Tritoons tend to be more powerful than their two-tubed cousins. Tritoons are usually made to carry more people which is why they have the third pontoon in the first place. For that reason, the motors are usually much more powerful. Again, this is something you can play around with but expect an average tritoon to have a 250 hp engine if it’s designed to hold a dozen or more people.

Because pontoon boats, especially older pontoon boats, were not designed for speed and power, many of the motors reflect that. You can get pontoons with much more powerful engines these days. But, if we’re looking at averages, expect a pontoon to be much less powerful than a tritoon.

Pontoons may be designed to carry 8 passengers and have an engine that puts out only 25 horsepower. It’s very easy to find much more powerful pontoons, of course, but they may literally be this subdued as well. All things being equal, you’d probably never want a pontoon with a 25 hp engine, because you’d be stuck at a very slow speed. Something closer to 50 hp is more typical of a pontoon used for simple cruising and fishing. 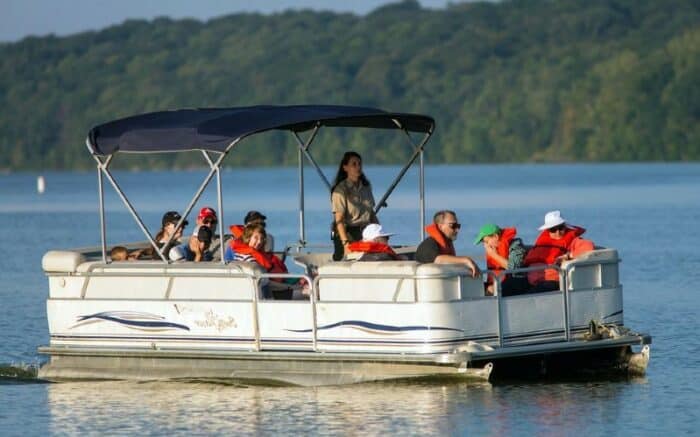 Pontoons and tritoons, as mentioned, are often used for cruising and fishing, but they can perform more intensive tasks if need be.

The extra pontoon in a tritoon makes them extremely stable on the water. With the added pontoon you’ll find a smoother ride in a boat that is easier to control and lends itself well to more things like water skiing, tubing and other activities that require more speed on the water. The extra pontoon is a great boost for safety as well, on a boat that was already pretty safe to begin with. People call tritoons unsinkable and while that’s not technically true, they do have the reputation for a reason. It’s very hard to sink a tritoon.

In some conditions, it can actually become harder to steer a tritoon than a pontoon, so that’s worth remembering. This can be especially true in tighter spaces like when you’re trying to maneuver into a dock or in a tight squeeze around other boats. Tritoons like a lot of room to maneuver because they’re so stable on top of the water they can even resist your attempts to move them around.

One of the big selling points of a pontoon boat is just how stable it is on the water. They don’t handle rough water very well which is why they aren’t used on the sea very often, but in calm lake waters they provide a lot of safety and reliability. And just like a tritoon, if you have a pontoon with enough horsepower then water skiing and tubing and the like are all options. It won’t be as fast or as stable as a tritoon, however.

There is little difference when it comes to maintenance between the two boats since they’re essentially the same thing. The addition of one tube does make a small difference, however.

It takes a little more time to maintain a tritoon than a pontoon for obvious reasons. When cleaning the tubes you have half again as much work because you’ll need to manage a third tube. That means your repair and maintenance costs will be slightly higher overall.

Also worth considering is that you may need a larger trailer or a different set up to transport and store a tritoon versus a pontoon.

Every boat needs regular maintenance so the maintenance of a pontoon is hardly out of the ordinary. One of the big things to remember is to keep the tubes clean. If algae and barnacles build up, the pontoon will slow significantly, so remember to keep them clean.

Tritoon Boat vs Pontoon Boat: Which is Better? 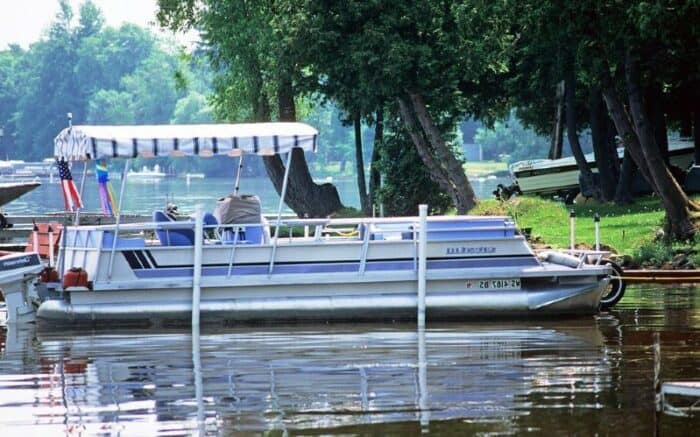 So now that we know some of the basic differences in the tritoon vs pontoon debate, which of the boats is better? In all honesty, a pontoon really only wins out over a tritoon in terms of the overall cost. You can get pontoons much cheaper, even brand new ones. And if you’re looking for second hand boats, the savings can really add up as many older pontoons are extremely cheap these days, relative to newer tritoons and pontoons.

If all you want to do is some easy recreational cruising and fishing on a lake, you may find that a pontoon gets the job done at a better price which makes it a better option. But if you like to go faster and want to do more things like tubing and skiing at higher speeds, or have more people on board for parties and socializing, triple pontoon boats might be the thing you need. 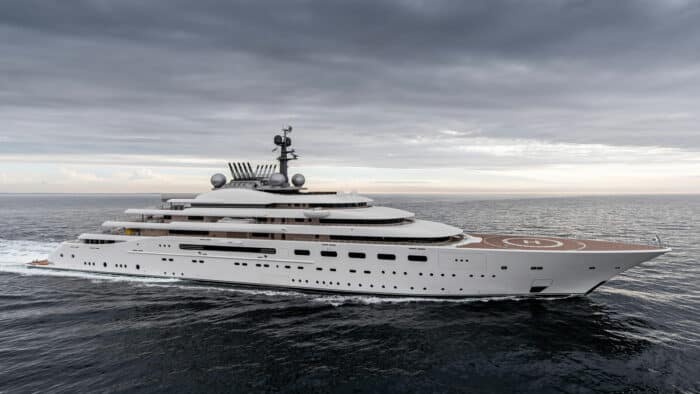 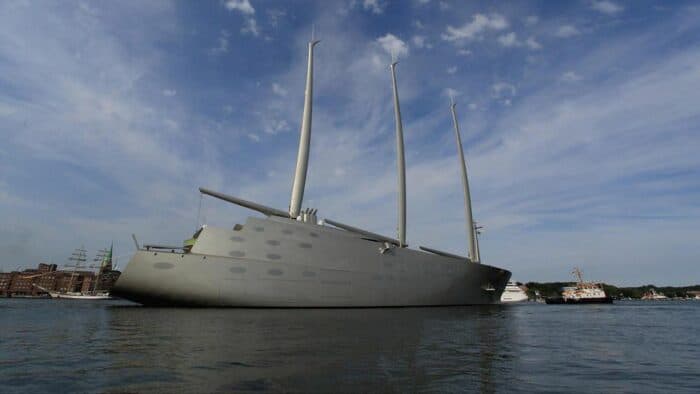 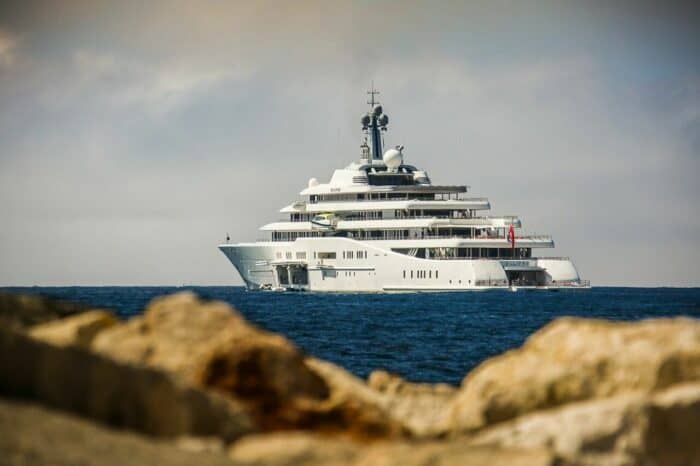 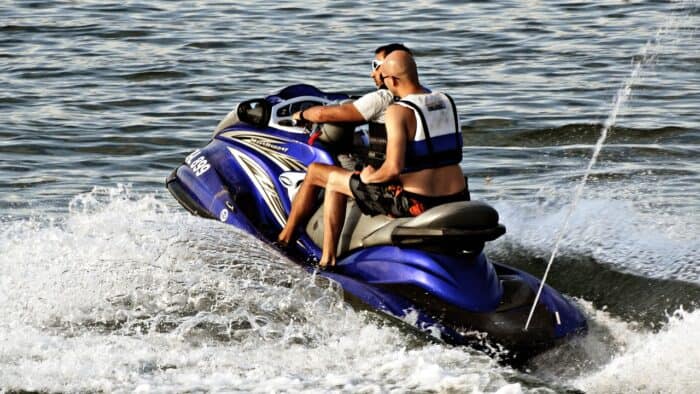