Why are Boats Referred to as “She”?

Naming vessels these days is a fun task for any boater. Head to your local marina and you’ll see dozens of clever names emblazoned on hulls. They’re often puns or little jokes. Historically, ships often bore the names of females. Think of some famous ships from books such as The African Queen. The Arabella from Captain Blood. The Demeter from Dracula. The Henrietta from Around the World in 80 Days. And of course, even the pronouns used to describe a ship are female. We refer to a ship as she or her. But why did this tradition start?

There are competing explanations for why ships are referred to female. Some are a little more colorful than others.

In the year 2019, the Scottish Maritime Museum changed how they refer to ships. They decided to be gender neutral going forward. From then on, they would only refer to a ship as “it.” The British Royal Navy responded by saying they will continue to refer to ships as “she.” Admiral Alan West of the British Royal Navy explains why he feels that’s inappropriate. West said that ships have been known as she for centuries. “They are, in a sense, like a sort of mother figure.” He went on to say they protect you, and that is why sailors view them as female. A ship, to many sailors, was like a woman. It made them feel safe. So a ship called a woman’s name made sense.

This may not be a technical explanation. However, it does show how many sailors may feel on the issue. Since sailors are the ones on the ship, it explains why they continue to use this language. 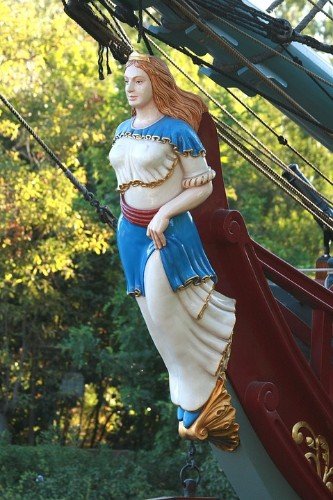 Very similar to the comparison to others is the comparison to a goddess. Ships like the Artemis and the Demeter were specifically named for Greek goddesses. Ancient sailors believed that the power of a goddess could keep them safe at sea and protect them from storms. Women were often not allowed on boats, so invoking a woman or a goddess allowed for a female presence. This is also perhaps why so many figure heads carved at the front of vessels were female. These figures were meant to protect.

In time, this gave way to more modern religious beliefs. Consider La Santa Maria. The largest of the three boats Columbus sailed to America was named for the Virgin Mary.

One thing to remember about the English language is that it’s not that old. Our language evolved from other languages. Many of the words we use in English have been borrowed from other sources. You can find French words like detour used in everyday English. The word anonymous has Greek roots. Cigar comes from Spanish. Lemon comes from Arabic. And many of our words have Latin roots. The English language is a patchwork.

It’s true that the Latin word for ship navis is feminine. But the English word ship comes from a High German word. “Schiff” is the word that gave us “ship.” This definitely complicates the idea that ship gender is rooted in language.

Another thing to consider is that an individual ship may be female, but what about types? Types of ships are referred to in masculine terms. Think of the Man o War. And in military terms, many ships are also masculine. A modern aircraft carrier will usually be named after a military man. In fact, this has been a part of naval history for years now. The tradition is well documented.

Traditionally, women were considered bad luck on ships. Now imagine a gang of men at sea for months on end. It’s not hard to guess that perhaps these men did want and miss a female presence. Naming ships for women would be some small comfort at sea. Invoking the idea of protection from goddesses, a mother or even the Virgin Mary would also be comforting. Even if the tradition did start in language, it seems to have evolved.

Modern ships are becoming gender neutral in their naming. But the reason for referring to them as female is very much rooted in tradition. The Latin word for ship navis is a starting point for this tradition. But the idea of the comfort of a woman, any woman from a mother to something beyond, must be acknowledged as a reason as well.