In general, it is safer to be in the water closer to a personal watercraft than it is to be near a traditional propeller-driven boat. That said, you need to be careful of a jet ski’s pump intake area which can be dangerous especially if you have long hair, as well as the steering nozzle which can shoot a high speed jet of water at a dangerous pressure.

Though your PWC doesn’t have an external propeller it does have an internal impeller which functions in much the same way. You can’t access this part of the machine with your hands but you can still fall victim to it if you are not careful.

The pump intake for a PWC is located on the underside of the boat. This area is where water is drawn into the intake as a result of the rotation of the impeller pump. Because it produces a strong amount of suction, it can draw in debris and garbage and clog the intake. You should always shut off the engine before trying to access or clean this area to ensure you don’t get injured accidentally.

If you do get exposed to the intake while the PWC is running, aside from the obvious risk of actually being hit and injured by the vessel which could cause serious damage like bruising, broken bones, loss of consciousness and even death, the intake can cause damage as well. The impeller is powerful enough to suck hair inside of the intake and either trap you under the craft or pull it from your scalp, neither of which would be pleasant.

Hands and feet can also be pulled roughly against the intake when the throttle is engaged and the pump is forced into action. A person in that area could get dragged under the jet ski as a result leading to serious injury or even death.

Although the rear of a jet ski is considered safer than the rear of a traditional boat with an outboard motor, it should not be taken lightly. The lack of a propeller does not necessarily make it safe. At rest there is no danger but when in motion the pressure of the jet stream can be a serious risk to people.

As the operator or even a passenger on a jet ski you likely have little to worry about in terms of that jet stream. If you fell off the vessel, it would move away so quickly you’d probably have nothing to worry about. But if you were swimming in the water nearby as a jet ski was started up and got blasted by the stream or, more likely, if someone was being irresponsible and exposing themselves to it intentionally, that could cause very serious injuries.

In 2001, a woman who was riding on a Polaris jet ski with a friend lost her grip and fell off the back of the vessel. She received massive internal injuries due to falling at a dangerous angle that allowed the jet stream to pierce her insides. You should never underestimate just how dangerous pressurized water can be to the human body.

Be Careful at Speed

Deaths on jet skis are relatively rare but there are a lot of injuries every year,  several hundred in fact. Though they represent only a small portion of all registered boats, they also represent about 20% of all accidents. Some of these injuries include sprains and broken bones which can occur either from being hit by a jet ski or from falling off at speed. Your arms, legs, hands and feet are at risk if you fly off a jet ski at high speeds and hit the water at a bad angle. Likewise, if you get hit by a jet ski at speed it’s not a lot different than being hit by a small car. Fractures and other injuries are a serious risk.

If you spend enough time watching jet skiers you’re bound to see at least one pull a sharp turn with a foot in the water. This is similar to what you might see someone on a bike or motorcycle do when trying to make a turn sharper than they could otherwise pull off. Your foot provides drag and a pivot point to turn the craft around and it can be done successfully, allowing a turn that is sharp and fast compared to how the craft would otherwise handle the maneuver.

The problem with a trick like this is that it can easily go wrong. If you hit the water at a bad angle it can pull your foot under the jet ski, or the force of the turn can dislocate your ankle. So not technically a specific part of the jet ski that can injure you but rather how you use the jet ski as a whole in this case.

You need to keep your hands, feet and hair away from the intake pump on your jet ski. Keep away from the jet stream pushed out of the propeller nozzle as well. And when a jet ski is in motion you want to keep your entire body as far away from the craft as possible because an impact can cause serious injury and death. Likewise you’ll want to keep your extremities out of the water when you’re in motion to minimize risk. Make sure you’re wearing proper safety gear including a life jacket at all times. Never operate a personal watercraft when you’ve been drinking, and make sure you know how to operate the vessel before heading out. As always, stay safe and have fun. 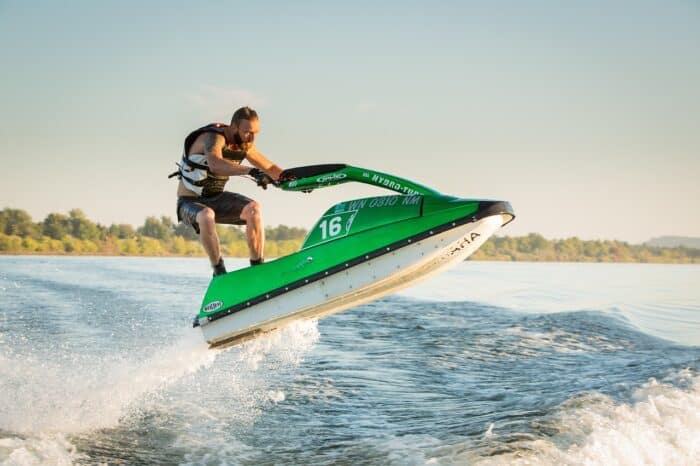 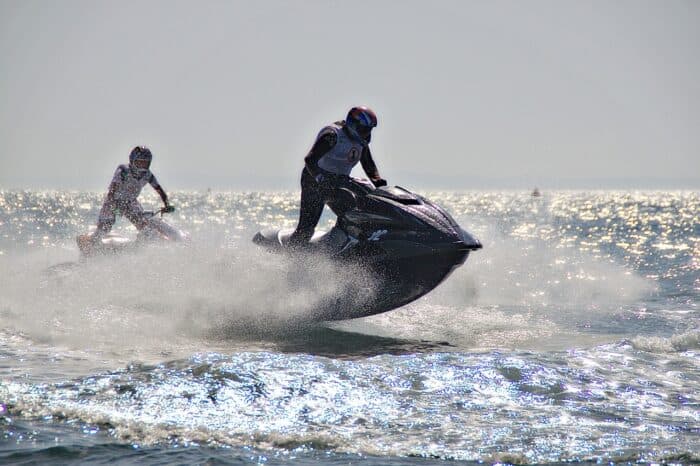