What Do Trout Eat

Throughout North America you will find many species of trout. They are a diverse and desirable fish to catch. There are also many subspecies that are popular, like steelhead. There are fish like char that are genetically similar but not true trout. For anglers who enjoy trout, there’s always something nearby no matter where you live. Some exist in abundance, while some are very rare.

Each trout species has some unique characteristics. Knowing what the trout you’re after prefers to eat can help you if you’re looking to catch some. What trout eat also affects how the fish grows and the size they become. Trout that eat plankton will not grow as large as those that eat other fish, right?

It’s good to know what you’re dealing with. That helps you understand them as a species. This, in turn, will help you figure out how to catch them. It also never hurts to understand more about something that you’re interested in. And finally, what a fish eats can affect the way the fish that you eat tastes. That’s why so many people don’t like bottom-dweller fish for instance. The flavor of the meat is often reflective of what the fish itself eats. When trout eat higher quality prey, they are better fish. Trout that eat smaller fish taste better than catfish that eat sewage. That just makes sense. 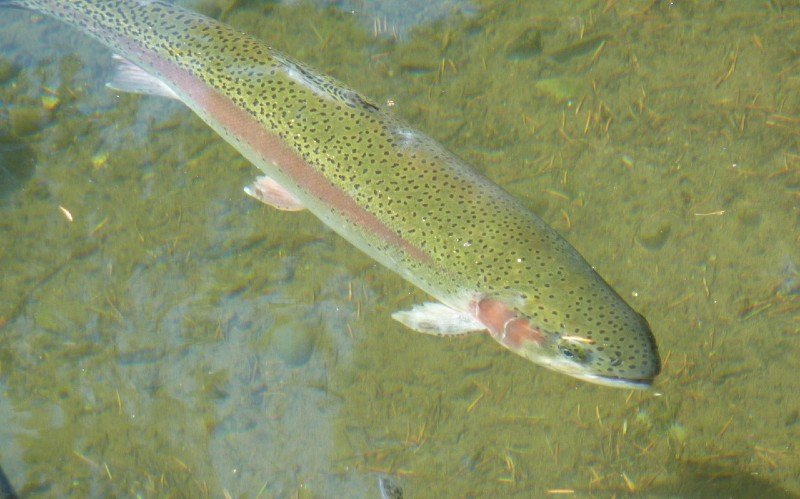 Rainbow trout are arguably the most popular trout species in America. Their appearance is colorful and striking. They’re strongly desired just for the sport of catching them, and also to eat.

In terms of what rainbow trout eat, these fish are carnivorous. Unlike some species, you won’t catch rainbow trouts eating aquatic vegetation. Most of the diet of a rainbow trout consists of things like:

Rainbow trout are not particularly finicky about their food sources, however. If it’s the right size and alive, they will probably try to eat it. Young rainbow trout feed mostly on insect larvae and other tiny things like that. As they grow older, they will supplement their diet with fish eggs. Also mayflies, snails and most other forms of aquatic life that share their habitat with them. 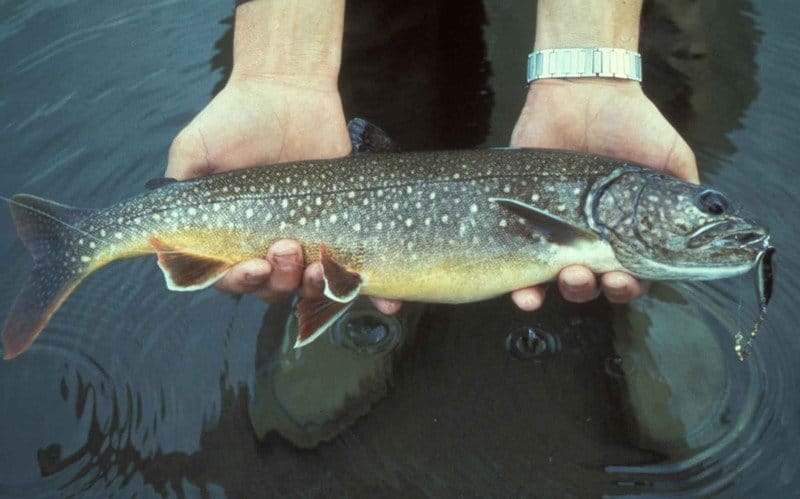 Lake trout are some of the largest trout he will find in North America. It’s not unheard of for a lake trout to grow to be 80 lbs or even over 100 lbs. There are small populations that you can find in the United States. You will find most lake trout in Canada.

Lake trout have diverse diets. There isn’t really a lot to that a lake trout won’t eat. Much of their diet consists of food like:

Lake trout that feed on plankton do not grow as large as their more carnivorous counterparts. They’re known to grow smaller but mature faster on that diet. They also do not live as long. 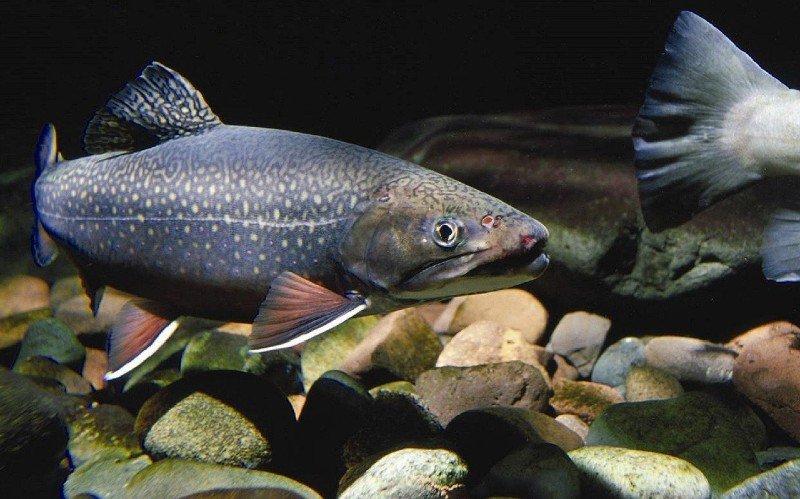 You can find brook trout throughout the Midwest United States. They also live in the east, and up through Canada. Brook trout rarely grow beyond 10 lb. Most that you find will weigh less than that.

When brook trout are young, they will feed almost only on plankton. As they grow they supplement their diet with more diverse organisms. Most brook trout live on a diet of things like:

Brook trout are opportunistic feeders. There is little they won’t eat if given the opportunity. Even things like small mammals that fall into the water may be eaten by a brook trout. 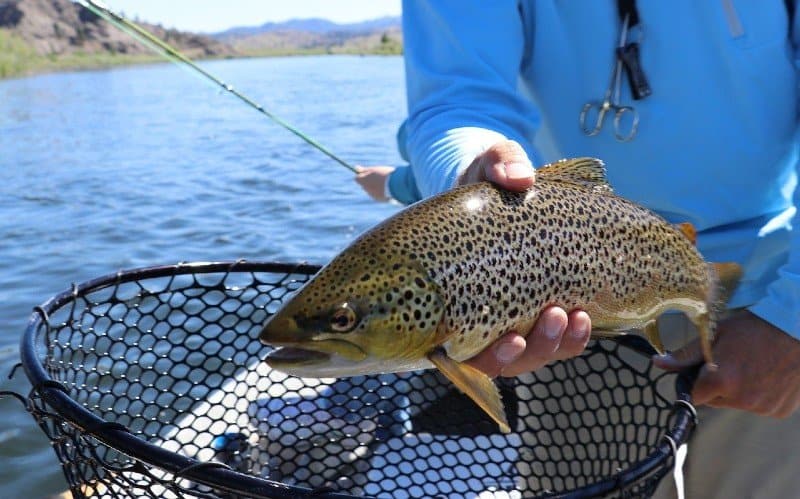 As you can see brown trout eat almost anything. They will attack mammals from the water that are drinking at a stream’s edge, which is unusual. Also unusual in a trout’s diet are turtles, but f they are small enough and the fish is large enough, they will go for one. 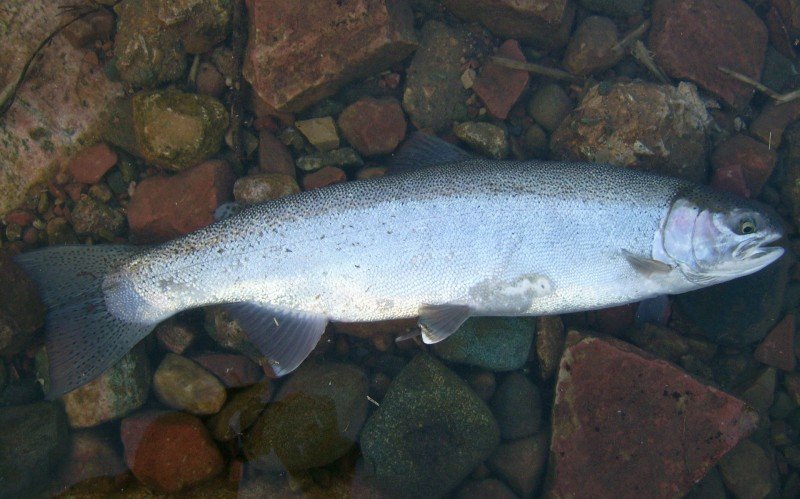 Steelhead trout are very popular among anglers. Steelhead are not technically their own species. They are anadromous rainbow trout. That means that even though they are born in fresh water streams, they spend much of their time in salt water. That is the major difference between a steelhead and a normal rainbow trout.

To complicate matters, steelhead are more closely related to salmon than other trout. They are still classified as trout, though. The government of Canada has at one time or another classified them as both trout and salmon. This can get confusing for some Anglers. It can also be confusing for those concerned with the fish’s conservation.

Steelhead are larger than their fresh water counterparts. This makes them more desirable for anglers. Those fishing for trophy trout would be looking to pick up steelhead. 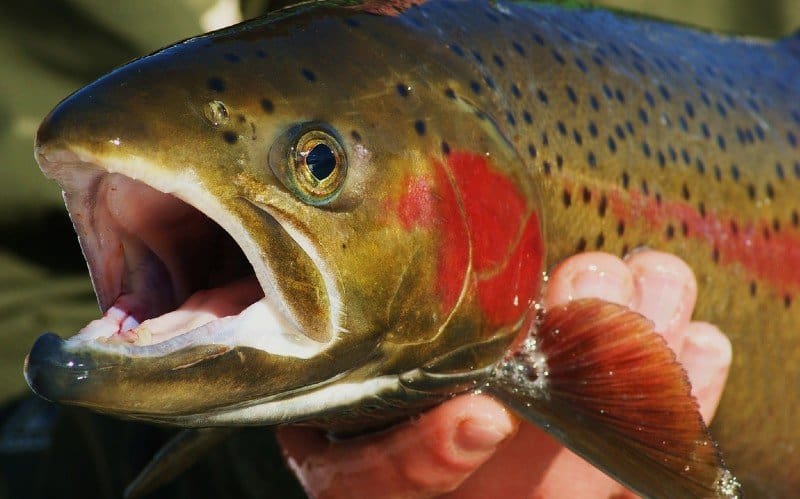 You can find a cutthroat trout along the west coast of the United States and Canada. They’re easy to pick out of a crowd because of their distinctive appearance. They are much longer than they are wide and they have unique coloration. Cutthroat trout get their name from the red slashes around their necks and gills.

The diet of a cutthroat trout is not too different from other trout. The biggest difference is that, because cutthroat trout live in salt water sometimes. That means cutthroat trout eat ocean prey. When they are young, they will spend most of their time eating things like insect larvae. As they get bigger, they move on to things like: 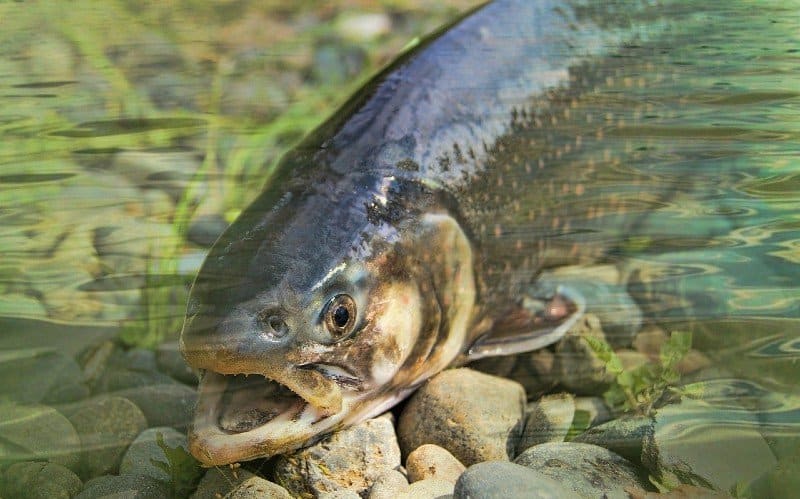 Dolly Varden trout live in the northwest region of the US. You can find them as far north as Alaska. They’re often mistaken for Arctic char or bull trout. Dolly Varden feeds on the eggs of other fish and fry. In particular, they will go after salmon eggs and fry when they share a habitat. Dolly Varden were long considered a nuisance fish for this reason. It was believed that they were inhibiting salmon populations.

It is now believed that Dolly Varden are more scavenger than hunter. These trout eat free floating fish eggs that have drifted away. They will also eat eggs that have gone bad and been infected by fungus. In fact, they are actually doing a service to clean up their habitats. 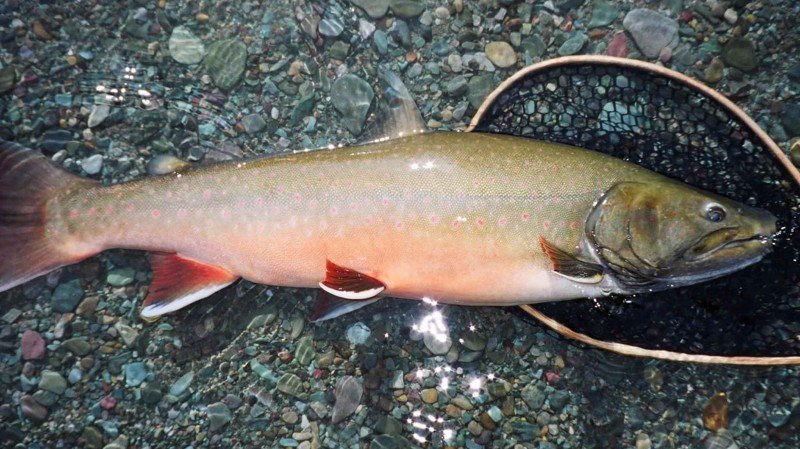 You can find bull trout in the Pacific Northwest area. They’re also prevalent in the North in Canada. The diet of a bull trout is not as diverse as some other trout species. They are mostly piscivorous and fairly routine and what they eat. Fly fishing is not an ideal way to catch bull trout. Flies are not their preferred food source at all.

Bull trout are a migratory fish species. That means their diet will change based on where they are. Bull trout can be anadromous which means that they will live in freshwater or saltwater. They do not all live in saltwater, however. Because of that, the fish that these trout eat can vary greatly. 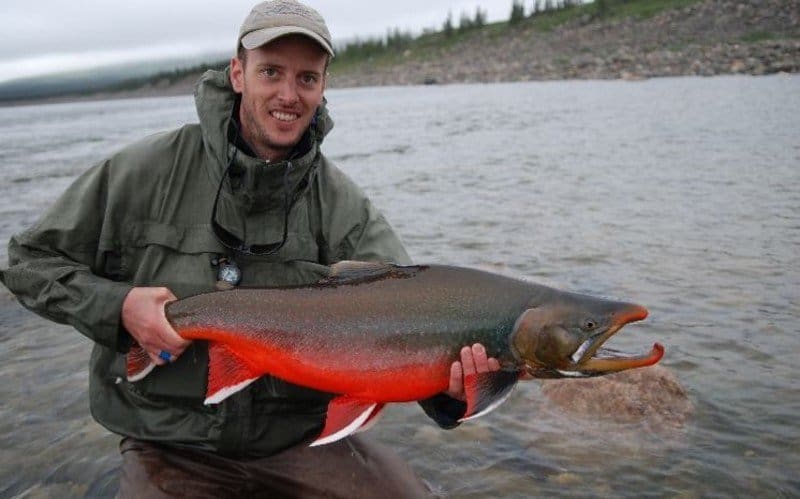 Just as the name suggests, Arctic char are most often found up north. Because of where Arctic char live, their diet can change based on the time of year. Some food sources will obviously not be available in the dead of winter.

During the summer, Arctic char trout eat food items like:

In the winter, the diet of the Arctic char must adapt to colder temperatures. During this time the trout eat food items like:

Insects, fish and eggs, and most snails and other shellfish are harder to find at this time of year. 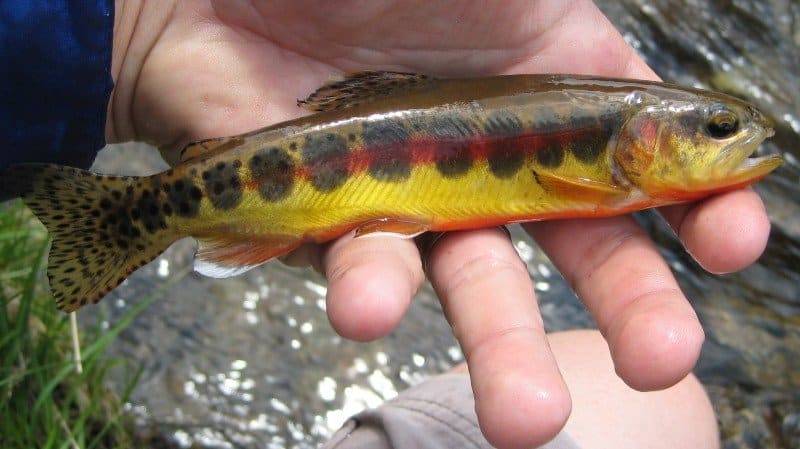 Golden trout are one of the most rare species of trout in North America. You’ll only find them in California streams and the Sierra Nevada mountain range. They live at high elevations in mountain streams and pools. Usually they’re very striking fish. Because their population is so low, most anglers will not fish for them. If you do fish for golden trout, catch-and-release is the best way to go.

Golden trout are small trout. The largest ever caught was only just above 11 lb. Because of their small size, their diet generally consists of small prey such as:

Most golden trout eat insects that float on the surface of the water. Fly fishing is often the best way to catch them. As long as their food source is small enough, they’re not too picky. Even crickets and other insects are fine if they find their way onto the water surface. 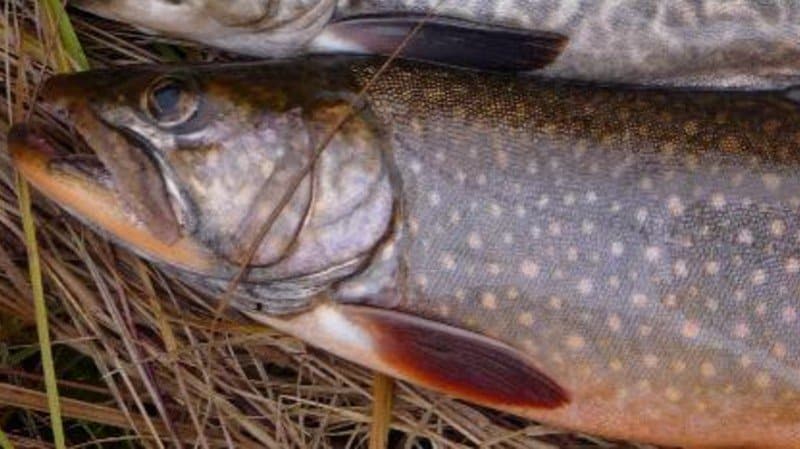 Splake are a hybrid species of trout. They can be found especially in Canada where the government runs a breeding program. They are a cross between a lake trout and a brook trout. The name is actually a mix of lake trout and speckled trout. Speckled is another name for brook trout. Sometimes they’re called Wendigo trout.

They are bred because splake are heartier than either of their parent species. They are better able to survive, and they grow bigger.

Like their parent species, splake trout have a wide variety of foods in their diet.

Trout diet depends on what kind of trout you’re looking for, and where in the country you’re fishing for them. Some are strictly carnivorous while others are opportunistic feeders. Unlike catfish, they do tend to be discerning in their food choices. The quality of a trout’s diet will reflect in the quality of the trout itself. Larger trout obviously feed on larger prey. Most of them have clearly adapted to feed on whatever is near at hand based on their habitat.

When you know what trout like to eat, you are better able to adjust your fishing style when you go looking for them. Whether this means your choice of live bait, flies, or even lures. It’s always a good idea to understand something about the fish that you’re after.