What Do Catfish Eat?

There is a reason that so many catfish anglers argue about the best bait to use. There are numerous kinds of bait that work very well to catch catfish. Some anglers swear by stink baits and dip baits. Some believe live catfish bait like fish and night crawlers are the best. Others would prefer cut baits for catfish. And of course there are those who will fish with chicken livers and hot dogs.

Many catfish in nature are omnivores. Others are what is known as opportunistic feeders. That means if food is presented to them they’ll eat it no matter what it is. Some species are only carnivorous. That’s why the range of bait that you can use to catch them is so extreme. It actually gets goofy sometimes. There are anglers who will swear by using Ivory soap to catch catfish. If you can use something that isn’t even food as bait, you can tell that catfish are not picky eaters.

Around the world you can find catfish species that are almost exclusively herbivorous. That means their diet is almost entirely made up of plant matter. There are also some species of catfish that are parasitic. That means they feed on the blood of other fish. These species don’t typically live in North America.

The whiskers on a catfish’s face are called barbels. Despite widespread belief, they are not dangerous. Instead, they are used by the fish to find food. Barbels are lined with sensory cells very similar to taste buds. Even in the mud a catfish can use these to taste food.

Though many catfish species are bottom feeders, not all of them are.  How and what a catfish eats very much depends on the body of water that it lives in. Many catfish are happy to eat food floating on the surface of water.

Most anglers in North America catch the big three species of catfish. Those are blue catfish, channel catfish, and flathead catfish. But there are many other species in North America as well. Bullhead catfish are also popular with many anglers. That said, they are much smaller and not as widespread. What catfish eat is as diverse as the many species themselves. 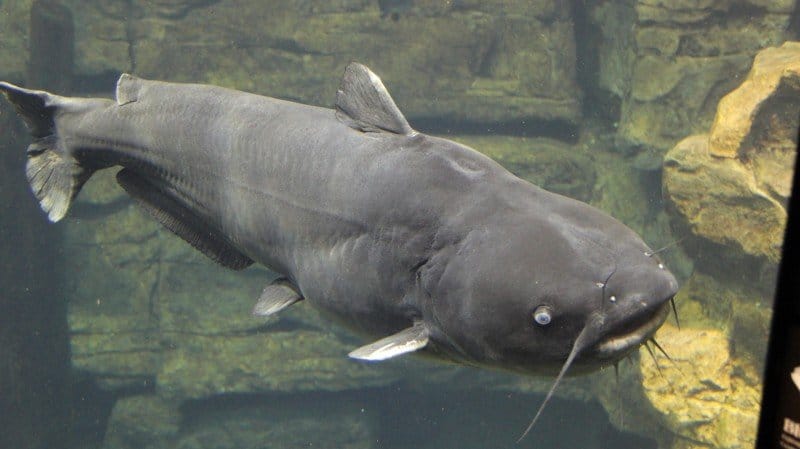 The largest catfish you will find in North America is the blue catfish. Trophy blues can grow to over 100 lbs. As you can imagine, their diet reflects their large size. In fact, there is very little a blue catfish will not eat. They feed on crustaceans such as crabs and crayfish. They will also eat clams and mussels. Blue catfish are also very fond of eating other fish. Small to medium bait fish are a favorite of blues. They’re not opposed to even eating other blue catfish if the opportunity arises.

Because blue catfish are opportunistic feeders, they may also eat unusual items. Researchers have uncovered a large variety of bizarre items inside blue catfish stomachs. That includes things like surgical gloves, metal, and even sewage.

Surprisingly, the main part of a blue catfish’s diet is vegetation. In fact, 50% of what they eat is vegetable matter. As they age and grow larger, they do focus on larger fish as prey, however. Large blues are often apex predators where they live. 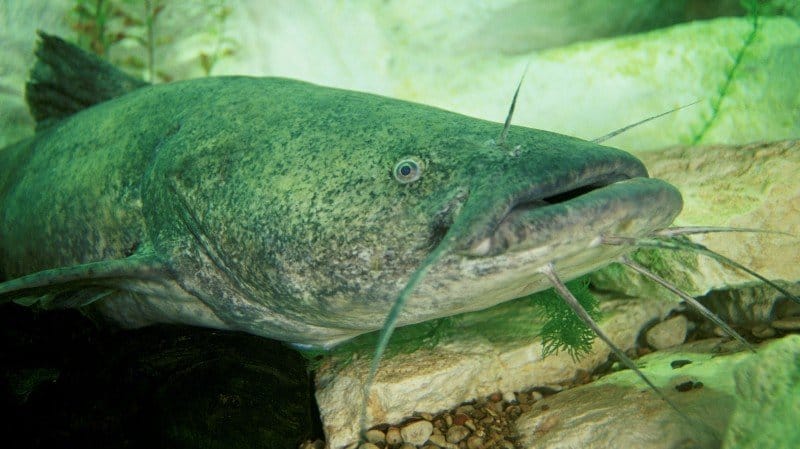 Flathead catfish have one of the more limited diets of all catfish. On occasion they will eat things like insects and crustaceans. Such variety is much more common in young flatheads. They are also fond of small fish as well. Minnows, bluegill, small perch, and other fish like that. Shad and bass are also favorites of flatheads as they age. Once they have matured flatheads will almost only feed on live fish.

Flatheads can get very large. One of the largest on record was over 5 feet long and 123 pounds. That means the fish they prey on can be large as well. 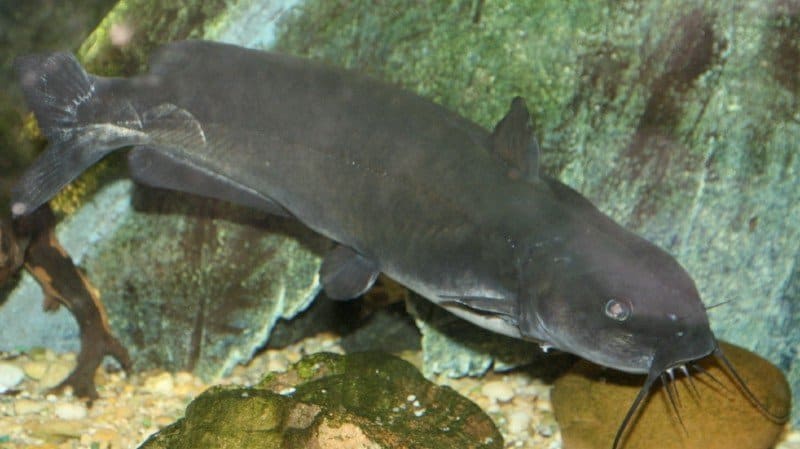 Channel catfish are the most opportunistic of the big three species. Channel cats will eat insects and small invertebrates. They’ll eat fish, snails, clams, and mollusks. They will even eat small mammals if they can get a hold of them. Some people have even seen channel catfish pluck birds off the surface of the water. Channel cats don’t care if their food is alive or dead.

If any kind of meat or living tissue is not available, channel catfish may also eat vegetation. Things like fruit or berries that fall into the water are fair game. Some aquatic plants are also eaten by catfish. Nearly anything can serve as a food source for channel catfish. 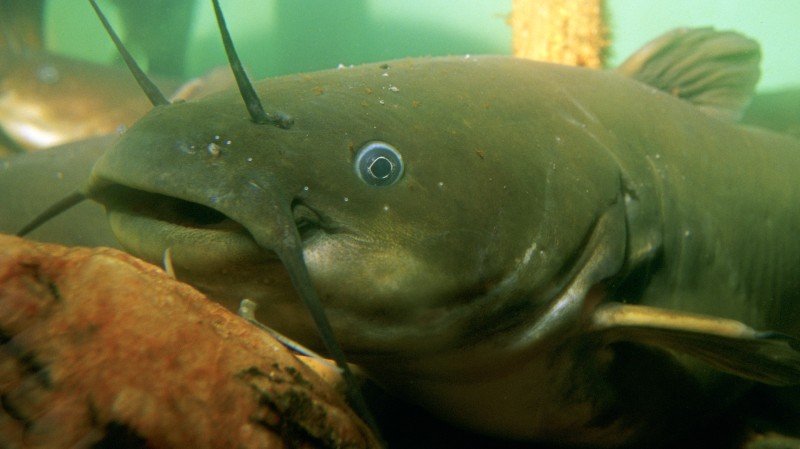 Bullhead catfish are scavengers and will eat most anything live or dead off the bottom. Because they are smaller than blue catfish or channel catfish, they will eat smaller prey. Small insects, crayfish, small fish are all in a bullhead catfish’s diet. 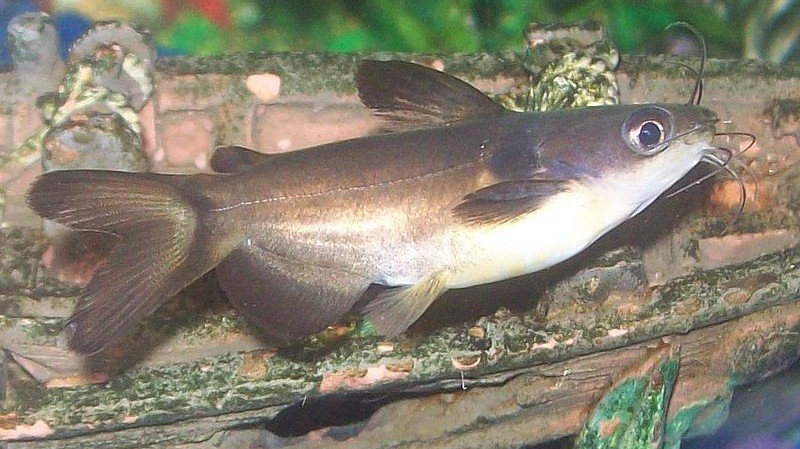 When catfish are still just little fries, they have to eat a suitably sized diet. That often means insect larvae and nymphs in the water. As they grow they may start eating small invertebrates. Typically, a young catfish will eat anything that doesn’t have a backbone. That includes things as large as young crayfish. Even at this young age, many catfish are not very choosy. 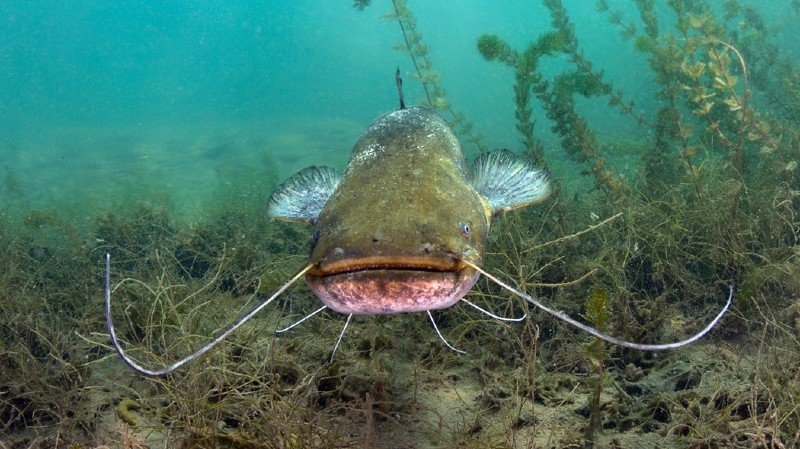 If you’re in the market for fishing at a catfish farm, expect a different diet. Farm-raised catfish have supplemented diets. They typically eat a pellet-based protein feed. Catfish pellets are usually around 30% protein. They’re also designed to float in warmer water and sink as it gets colder. This allows them to stay at an optimal depth for the catfish to eat. Of course, being opportunistic, they will eat most everything else they can find as well.

Depending on the farm, catfish can have their diet supplemented with many other items. Farmers who raise chickens and catfish often boil eggs for the catfish. This is pure protein and is a good food for any catfish. They will also eat other farm-raised fish like shad or tilapia even.

As you can see, what catfish eat is very diverse. What one wants to eat may not be appealing to another. That’s true even from one location to the next. That’s also what makes catching them so much fun. There are so many options for attracting them. It can really be exciting trying to master the best bait and approach.