But I Don’t Want To Be In Charge! (Continued)

by Chris Riley Updated on November 23, 2019. In nauticalknowhow

The last article focused on suddenly finding yourself in charge of a small outboard vessel, but what if the owner/skipper is suddenly injured, becomes ill or falls overboard on an inboard boat or, worse yet, a large inboard twin engine. Once again, you were just along for the ride, you don’t know anything about the boat, about what to do or how to do it – but…suddenly YOU are in charge. Suddenly, YOU need to know how to run the boat, YOU need to know how to use the emergency equipment, YOU need to know what to do in each situation that requires action. Don’t wait until YOU are suddenly in charge, learn the basics before just “going along for the ride”.

The basics are the same no matter what size the boat you find yourself on; you need to know the location of the Personal Flotation Devices (PFDs), the fire extinguisher(s), emergency signaling devices and other safety gear. You also need to know how to operate the VHF radio and how to lower the anchor. These two items may be your lifeline to safety.

Again, it is a good idea to take a Basic Boating Safety Course even if you don’t own a boat. The more time you take to educate yourself the more likely you will be a hero rather than a hindrance, should an emergency arise.

Pay Attention To The Basics

Rather than just sit there in the “co-pilot” seat looking at the sky and the water, look around, ask questions, watch what the owner/skipper does. This article is not intended to make a novice an experienced boat handler but we hope to at least get the inexperienced person to some level of comfort with what he/she sees around them.

Note the typical cockpit layout below. You have electronic equipment such as a VHF radio, Depth Finder, and GPS. You also have the controls and sensors for operating the boat such as the clutches (which shift gears), the throttles (which control the speed of the engines) and the various gauges which you should monitor as you do in your car.

This layout is for a typical twin engine vessel. A single engine will have only one clutch and one throttle. Pay particular attention to the RED knobs on the throttles. They are so marked to make sure that you don’t forget which you are handling. You wouldn’t want to be in a close quarters situation and think you were shifting from reverse to forward while accidentally pushing the throttle forward instead of the clutch. Hint: When operating clutches on a vessel with the above configuration put both hands on them and don’t let go. This will keep you from accidently grabbing the throtles.

Lesson One: How Do Clutches and Throttles Work

Lesson Two: How Does An Anchor Windlass Work

The vessel on which you find yourself suddenly in charge may or may not have an anchor windlass (assists in raising and lowering the anchor by electric motor). If it does not, then the anchoring is fairly straightforward as outlined here . However, if you find yourself on a vessel with an anchor windlass the steps are the same, just the release and retrieval of the anchor are different. 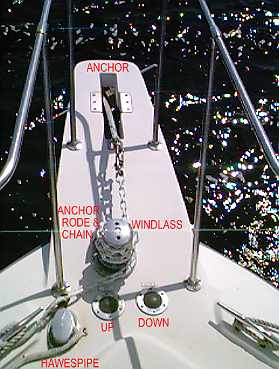 The picture at left is a typical small boat (38′) electric anchor windlass. The first step in operating such a system is to make sure that you have power to the windlass.

Normally, when underway the main breaker to the windlass will be turned on but there is usually a switch in the cockpit which disables the power temporarily. This is so that you don’t accidentally step on the up and down switches on the deck while underway or while handling lines on the bow. Make sure that the cockpit switch is on.

Notice that the anchor rode (chain/line that attaches the anchor to the boat) is cleated off on the port side to secure the anchor up and that the remainder of the rode leads through the “hawspipe” (to the left of the “UP” switch) into the anchor locker.

The first step to lowering the anchor is to remove the cap from the hawespipe. As a rule of thumb, you want to put out anchor rode which is 7 to 10 times the water depth. Pull enough anchor rode out of the locker and lay it out neatly up and down the deck.

Next, uncleat the anchor rode on the port cleat which was holding the anchor securely and recleat the rode at the maximum amount of scope you expect to let out. Make sure the boat is completely stopped and, once the rode is cleated, you simply step on the down button and the windlass will lower the anchor. Make sure that you keep your hands and feet clear so you don’t get tangled in the anchor rode and get pulled off the vessel.

Lesson Three: How Does A VHF Radio Work

The vessel’s VHF radio is fairly simple to operate and if the owner/skipper was operating legally, it should already be tuned to channel 16 which is the hailing and distress frequency. For more information on VHF radio procedures look at Marine Radio Procedures in the Nautical Know How Tips Archive. In order to call for assistance, hold down the “transmit” button on the side of the microphone and speak directly into the mike. Once you have delivered your message, release the button and wait for a response.

Let’s explore two different scenarios in which you might find yourself. Whether you are in a single engine or twin engine boat really doesn’t matter. As was mentioned above, we aren’t going to make you boathandlers, just emergency situation solvers.

You have just left the marina and are heading out for a day of coastal cruising. The owner is operating the boat through the well marked channel and has explained to you that it is important to keep within the channel which has sufficient depth to safely operate. He/she has shown you how to read the depth finder and you find that the channel has a consistent depth of 8 feet.

Suddenly the owner, who doesn’t look so good all of a sudden, collapses and falls out of the chair behind the wheel. What should you do?

Your first reaction should be to try and get the owner, now victim, to acknowledge his or her situation. Ask if they are okay. Even if they are unconscious and not breathing, there is nothing you can do until you have control of the boat.

You should first take off all power and shift to neutral. While the boat coasts to a stop try to steer toward the edge of the channel. Assuming you are not in immediate danger of drifting out of the channel or running into another vessel, check the condition of the victim again.

Let’s assume they have simply fainted and are still breathing and have a pulse. Attempt to contact the marina that you just left via VHF radio and advise them of the situation. Explain that you are not experienced and that you need immediate assistance. Give them your location by noting the latitude and longitude on your GPS or simply note the channel marker number that you might be closest to.

Depending on your comfort level in actually operating the vessel, you should either consider anchoring, tending to the victim and waiting for help or putting the vessel in forward and turning the vessel to return to the marina. If you chose the latter, do so under control. You don’t necessarily need to go at full idle but don’t overdo the speed. Remember, boats don’t have brakes and you can only stop them by running into something, running aground, coasting to a stop in neutral, or shifting to reverse at full idle.

You are offshore, within sight of land, and headed for a favorite fishing spot that the owner has programmed into the GPS. In this case the owner is a he and he tells you to take the wheel while he goes to relieve himself. No problem, anyone can steer a boat- so you settle in as commanded.

The water is not too rough but an occasional wave that is considerably bigger than the rest comes along and tosses the boat slightly. Suddenly you hear a scream and a splash and look aft to find that the owner was thrown overboard off the stern by that last unexpected wave. What should you do?

You should first pull the throttles to idle and simultaneously shift the clutches to neutral. Immediately throw the Type IV throwable device in the direction of the victim in the water. Try to keep focused on the individual in the water. Don’t lose sight of him.

Once you have something that floats in the water in the vicinity of the victim it is time to attempt the rescue. After making sure the victim is clear of the props, shift the clutch(s) into forward and at idle speed make a U-turn and head back toward the victim in the water.

Make sure to turn the bow toward a person in the water, swinging the stern (and props) away from them. Since he is conscious and can swim, don’t get too close. Approach from downwind so that he floats down to you, not the boat floating down on the victim.

Be sure to shift to neutral well before approaching the victim and coast to a stop short of him. From here, try to throw a line and a PFD to the victim in the water. Once you have him attached to the boat, DO NOT use the clutches.

The two scenarios above were dangerous but obviously could have been much worse. For instance, what if the person in the first scenario wasn’t breathing and didn’t have a pulse and what if you didn’t notice the person in the second scenario go overboard? What would you do then? Give it some thought, it could happen.