A boat on the water is a great place to watch clouds. It’s also a pleasant way to pass the time when you are bored. It can also save you and your family from being caught in a sudden thunderstorm. A skipper knows to always check the weather forecast before leaving the dock, but sometimes weather changes happen very rapidly. You can “keep a weather eye” by watching clouds and paying attention to changes in the wind and the seas.

When I first started to learn about clouds, I found all the names confusing and hard to remember. So I developed my own system for classifying clouds. (If you have your own system, let us know and we’ll put it up here.)

First you need to identify clouds by their shape. There are actually ten different types of clouds, but for now we’ll concentrate on two basic shapes . The first type looks like spoonfuls of marshmallow cream or cool whip (cool whip = cumulus). These are Cumulus clouds and they are puffy. Cumulus clouds can look like animals or people. The other shape of clouds is pretty flat and straight – your plain old white bread clouds (straight = stratus). Stratus clouds are flat (like bread) and can be layered or thin and wispy.

I remember cumulus because they remind me of cool whip.

Stratus means “spread out, flatten, cover with a layer”

Nimbus means “rainy cloud”. Nimbus clouds can be either cumulus (puffy) or stratus (flat).
That part’s pretty easy. The other thing you need to know is the height of the clouds. There are three catagories of heights:

and then there are clouds that can grow from low to high:

Then there’s stratusstratus – low (stratus) and flat (stratus) – but since that is redundant, we just call them stratus. (I just made that up.) 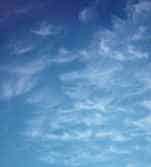 Cirrus clouds are the most common of the high clouds. They are composed of ice and consist of long, thin, wispy streamers. Cirrus clouds are usually white and predict fair weather. Sometimes called mares tails, they stream with the wind. By watching the movement of cirrus clouds you can tell from which direction weather is approaching. The appearance of cirrus clouds usually indicates that a change in weather will occur within 24 hours.

Medium high clouds occupy altitudes of 6,500 feet to 18,000 feet . These clouds are called alto clouds. Alto clouds are used to predict weather changes in 6 to 12 hours.

Low clouds, called stratus clouds, are at altitudes up to 6,500 feet . These clouds form a solid sheet or layer of cloud mass.

Stratus clouds are uniform gray in color and almost cover the entire sky. Light mist or drizzle is sometimes associated with Stratus clouds. A Stratus cloud touching the ground is fog.

Vertically developing clouds are the Cumulus (puffy) type. These small, lumpy clouds are low “fair weather” clouds. However, as they develop vertically (up) they may go from small, fair weather clouds to large, boiling, vertically-growing monsters called cumulonimbus.

Cumulonimbus are generally known as thunderstorm clouds. High winds will flatten the top of the cloud into an anvil-like shape. Cumulonimbus are associated with heavy rain, snow, hail, lightning, and tornadoes. The anvil usually points in the direction the storm is moving.

What Are Storm Clouds Called?

If you still can’t remember all of the cloud names and formations, you can always watch the clouds for two things that indicate a high probability of a storm:

A “lowering ceiling”: This means that the height of the stratus clouds (flat clouds) gets lower and lower. As the ceiling lowers you will see types of storm clouds in the following order:

Cirrus
Cirrostratus
Altostratus
Stratus
Nimbostratus – storm clouds!
If you see this happening, calmly tell the skipper “I believe we should head back now because I have observed increasingly lower cloud formations from cirrostratus to altostratus to stratus – and you know what THAT means!” (Right!)

Watch for cumulus (puffy) clouds that start to rapidly develop vertically (up) to become cumulonimbus thunderstorm clouds. On hot and humid days, these storms occur over water as the radiant heat from the land absorbs moisture from nearby water and rises to produce thunderheads. 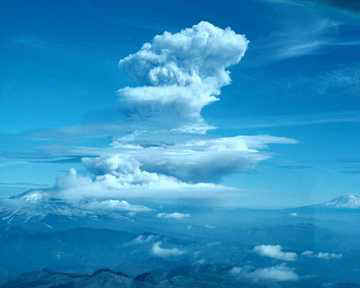 This is an example of a cumulus cloud that is growing vertically (up). The bottom of the cloud is made of water droplets and the top is made of ice crystals.

The cloud may be described as “boiling” but not because it’s hot. Parts of the cloud roll in a circular motion, much like boiling water.

A thunderstorm could develop very quickly.

Other things to look for that indicate an approaching weather change:

Weather changes generally come from the west/southwest so scan the sky with your weather eye, especially to the west.

A sudden drop in temperature and change in the wind (increasing winds and/or seas) often means that a storm is near.

If you have a barometer on your boat check it every two to three hours. A rapid drop in pressure means a storm is approaching.

IF A STORM IS NEAR the most important thing for you to do is PUT ON YOUR LIFE JACKET. Stay low in the boat so you don’t become a lightning rod! Help the skipper by maintaining a watch for other boats and floating stuff in the water and by fastening down loose gear, hatches and ports.

Storm Cloud Names: The Types Of Storm Clouds To Worry About

While there are a number of factors that could lead to a storm, there two things you should really keep an eye on: the types of rain clouds that are floating around, and at what height they’re floating at. If you’re looking at flat clouds that are suddenly getting lower, or watching puffy clouds getting even higher, then a storm could be heading your way.

Set your VHF radio to your local weather channel and listen out for any storm warnings, put your life jacket on, and keep your bilge pump on standby. You may be in for some heavy weather. 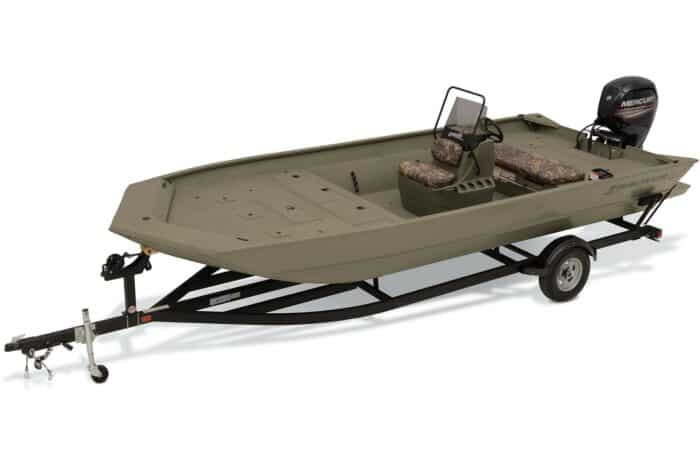