If the Eclipse is the true holder of the most expensive crown, then why does everyone say it’s the History Supreme and what made it allegedly so expensive? Let’s look!

What is the History Supreme?

According to reports, History Supreme was created by a man named Stuart Hughes who, in the vessel’s design, incorporated 100,000 kg of gold and precious metals, or about 220,000 pounds. Everything metal on the boat is gold or platinum, even the bottom of the boat and the anchor. Rails, accents, even walls are said to be covered in solid gold and platinum.

The master bedroom is said to have a wall made from meteoric stone that features platinum accents and also T-Rex bones. Supposedly there’s also a massive 18.5 ct diamond inside a liquor bottle on display as well. That alone is said to be worth $35 million. The T-Rex bone, said to have been found in Arizona, has a value of $89,000.

History Supreme doesn’t have a lot of the amenities that huge mega yachts normally have . It’s only listed at 100 feet long  Because of its size, the History Supreme doesn’t have the over the top luxuries like a swimming pool, a massage room, or its own boating dock with a smaller yacht inside like some of the behemoths do. It’s closer, from a functional standpoint, to most much, much cheaper luxury yachts, the kinds that regular people could actually afford. You know, minus the massive amounts of gold and precious metal.

Why Isn’t This the World’s Most Expensive Yacht?

You may have noticed up top that I said this is allegedly the most expensive yacht in the world. The fact is, no one has seen this thing in person. Stuart Hughes claimed to have built it for a Malaysian businessman and that the process took three years. Hughes is known for turning the everyday in luxury by doing just what he claimed to do with this boat. He has adorned iPads and iPhones in platinum and diamonds to make incredibly over the top and excessive accessories over the years. In fact, a $6.4 million iPhone case covered in 500 diamonds was supposed to come with the History Supreme. So he definitely did some fancy work.  Nothing nearly as big as the yacht, however.

There’s some speculation that the alleged owner is billionaire Robert Kuok, but his fortune is around $12 billion so dropping nearly half of his entire bank account on a boat that he then kept hidden from the world is a little suspicious.

How fast does this yacht go with its 220,000 lbs of gold? What’s the displacement? What engines does it use and how is it on fuel trying to lug all of that around? There are literally no technical specs for the yacht available anywhere, which is pretty suspicious if you’re the kind of person who wants to know how this vessel works with all the extra stuff stuck to it. Platinum yachts just aren’t a thing, even in the luxurious superyacht world, and the most expensive private yachts usually have high value amenities, not just needless weight in precious metal.

The Baia One Hundred Yacht

Italian yacht makers Baia produced luxurious yachts including the luxury yacht called the Baia One Hundred back in 2008. This was the model of boat shown in the History Supreme yacht photos. But the Baia has a displacement of 80 tons. So how could it handle 220,000 lbs of added gold? That’s an extra 110 tons.

In a final crushing blow to the idea of the History Supreme, the sales director from Baia said the photos, the same ones in our article here, originally came from their website and were simply doctored. They are not new photos of a gold and platinum covered boat, just photoshopped versions of the older model that they produced.

So what are the true most expensive yachts in the world? Let’s look!

This yacht was originally commissioned by the Prince of Brunei but then put on hold.The design plans were sold and then picked up by the government of Dubai where it was upgraded to a royal yacht. It has room for a crew of 88 and 24 passengers across 7 decks. All of that also includes room for a movie theater, a pool, helipads and more

With 7 decks, the Serene was the largest yacht built in Italy at the time of its construction back in 2011. This one features an enclosed winter garden that can be used as a dining room, a swimming pool, a tender garage that can hold a mini sub and a pair of helipads which you’ll soon see is really a standard feature for these megayachts.

Formerly the Topaz, the Motor Yacht A+ was launched back in 2012. It features dual helicopter landing pads, a large jacuzzi, a pool, a cinema, and a gym. It has a total length of 482 feet making it one of the largest yachts in the world as well.

At 508 feet, the Al Said was first launched back in 2008 and purchased by the Sultan of Oman. You can find a lot of the typical megayacht stuff here but this one has the unique addition of a concert hall that can hold an entire 50-piece orchestra.

Also the largest yacht in the world at just shy of 600 feet, the Azzam can travel at 30 knots which is pretty impressive for its size. It’s definitely not your average fishing boat. It also has its own missile defense system in case anyone decides to try to attack it at sea.

Up to 36 guests and 60 crew can be accommodated at one time. Unlike some yachts that have all of their features and amenities well publicized, the Azzam keeps a lot of what it has going on secret. There are no photos of the interior and no one knows what amenities it includes but it’s safe to assume they must be pretty impressive.

Set out to sea in 2016, the Dilbar weighs nearly 16,000 tons and, at 512 feet, it’s also incredibly long though it doesn’t take the title from Azzam. Of that 512 feet, an entire 82 feet is devoted to a massive swimming poo l.As with many similar yachts, it has dual helipads, a cinema and room for dozens of people and crew.  In 2022, the yacht was impounded because it was linked to a Russian billionaire and many of their assets were frozen, so it’s not clear where the vessel is now.

2. The $1 Billion Streets of Monaco

If you like your yachts extravagant, you’ll like the Streets of Monaco. One of only two yachts in the world (that we know of) that will crack the $1 billion mark, it gets its name from the fact it’s designed to look like the actual streets of Monaco. That means there’s a casino on board. It also features a replica of the famous Monaco Grand Prix race track that can be used for go-kart racing.

The only caveat with the Streets of Monaco is that the company behind it, Yacht Island Design, is only planning to make it. It doesn’t actually exist yet. And it’s been in the planning stages since at least 2013, so don’t hold your breath to see it materialize any time soon.

The Eclipse is owned by Russian billionaire Roman Abramovich, the man who owns the Chelsea Football club,  and clocks in at a very impressive 533 feet in length making it not only the (potentially) more expensive, but one of the biggest as well after the Azzam. It was built back in 2010 and features some mind-blowing amenities.

In terms of how it performs on the water, it’s the largest boat in the world to use a rotor-based stabilization system that works against roll motion when it’s either cruising at slow speeds or anchored.

The maximum speed is 25 knots with a cruising speed of around 22 knots. How much fuel do you need to keep this thing going? It can carry one million liters which means it has a range of around 6,000 nautical miles at 21 knots before it will need to find a port where it can refuel.

In addition to the massive storage space for fuel, it’s also able to hold almost 150,000 liters of fresh water on board, which is helpful with all those jacuzzis.

The cost at the time of its construction is believed to have been around $590 million. As of September 2022 it was still registered in Bermuda with a $438 million value. That said, it’s believed that the extensive upgrades to the boat during a 2015 refit have increased its value to that $1.5 billion mark. There are unconfirmed rumors that upkeep for the yacht clocks in at a staggering $60 million per year.

We’d be remiss if we didn’t mention this one as well. The Metaflower Super Mega Yacht sold in 2021 for 149 ETH (the cryptocurrency called ethereum) which was the equivalent of about $650,000 US. Why mention it here when the most expensive yacht in the world was so much more? Because the Metaflower is an NFT yacht and it is the most expensive virtual yacht in the world. Yeah, it’s not real. It exists in The Sandbox, a metaverse game featuring digital assets.

Despite what many websites may tell you, the world’s most expensive yacht is the Eclipse, which comes with a $1.5 billion price tag. The History Supreme, often touted as the most expensive yacht ever, seems to just be a hoax that won’t die. There’s no evidence it was really built but there is a lot of evidence that it’s fake given the altered photos and the physics of how a boat with that much gold would even work. 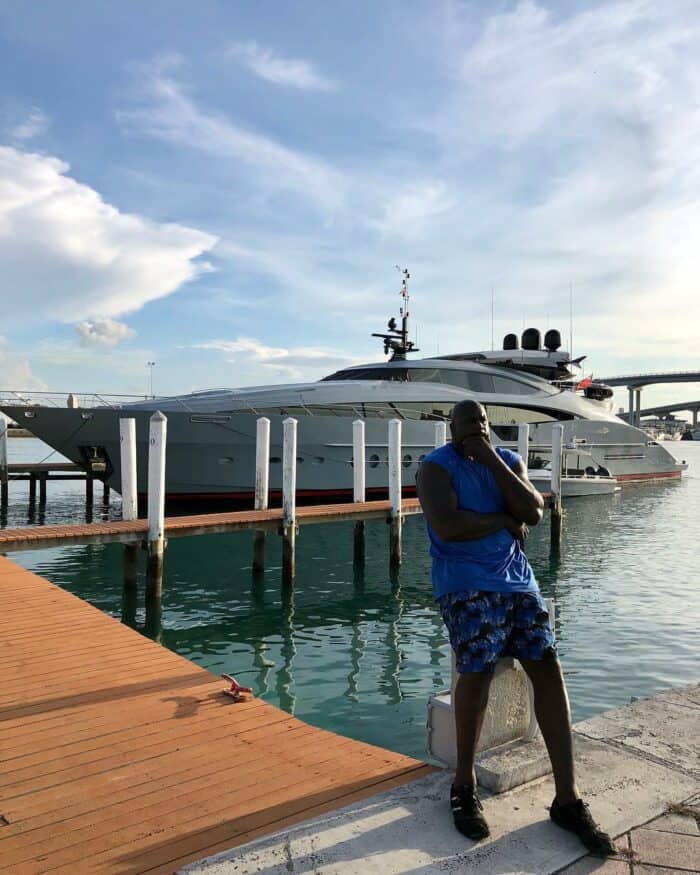 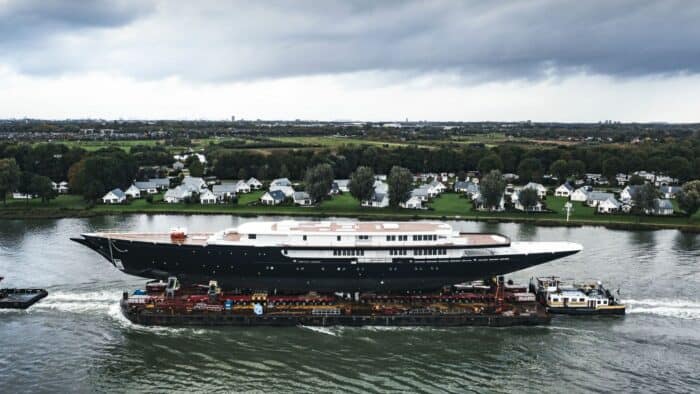