Life Jackets…So Many, So Different

by Chris Riley Updated on July 25, 2019. In nauticalknowhow

Coast Guard statistics show fatality rates have dropped over the past 25 years due to, in part, the use of inherently buoyant PFDs. In the early 90s the Coast Guard recognized that inflatable PFDs might be more appealing to recreational boaters thereby increasing their usage. Approval came in 1996, and inflatable PFDs are now available to the boating public. When the United States Coast Guard approved inflatable PFDs for general use, many questions arose. In order to find answers to these questions, several different references must be researched. No single USCG document covering this subject exists. Some of the typical questions are as follows:

Why are there several types of life jackets or PFDs?

Personal flotation devices are classified into various types based on the environment in which they are designed to perform and their intended use. The design of the PFD is tested on its characteristics of buoyancy and in-water performance. For example, the Type I is effective for all waters, especially open, rough and remote waters where rescue may be delayed. It is designed to turn most unconscious wearers in the water to a face-up position. Type II PFDs are designed for use where the water is calmer and rescue can be expected in a shorter period than in open seas. Type III PFDs are designed for protected waters where rescue can be expected in a very short period of time. 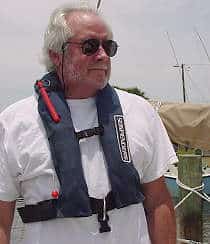 What is an inflatable personal flotation device?

The main characteristic of the inflatable PFD is that it has a chamber or bladder that is filled either by a compressed air cartridge or by mouth. The air chamber is its only source of buoyancy. When the air chamber is fully inflated, most designs resemble the Type II yoke style PFD. In its ready to use (packed) form, the PFD will not float nor will it provide any buoyancy for the wearer. These PFDs are classified as either Type III or Type V depending upon their design characteristics and intended use.

What is a hybrid inflatable personal flotation device?

When was the inflatable PFD approved?

Who may use the inflatable PFDs?

Are all inflatable PFDs in the market place approved by the Coast Guard?

Most of the inflatable PFDs being sold on the open market are not approved by the Coast Guard. Prior to any inflatable PFD being approved by the Coast Guard, an independent laboratory must evaluate the PFD designs. The laboratory performs approval testing using the Underwriters laboratories (UL) 1180 standard. The UL standards were developed in accordance with the American National Standards Institute procedure for voluntary industry standards. An inflatable PFD design that does not comply with the UL standard will be labeled as a conditionally approved Type V PFD. The Coast Guard defines Â“conditionally approvedÂ” to mean that its approval is based on what the user must comply with in order for the PFD to be counted toward meeting the carriage requirements. The wearers of the PFDs are limited to persons at least 16 years of age and weighting more than 80 pounds. The Coast Guard acknowledges that there are no regulations currently preventing the sale of non-approved inflatable PFDs to the public.

Can someone use non-approved inflatable PFDs?

Coast Guard regulations do not prohibit the carriage and use of non-approved PFDs. However, carrying these PFDs does not count toward meeting the equipment carriage requirement. The Coast Guard continues to believe that in order to achieve the minimum acceptable level of safety and meet operational needs, only Coast Guard-approved devices, which meet specified safety criteria, should be counted toward carriage requirements. The Coast Guard notes that a poorly manufactured device could fail to provide needed assistance, or a poorly designed device could actually perform in such a way that the user is safer having no PFD at all. However, the Coast Guard agrees, in general, that unapproved equipment is better than no equipment.

Will the approved inflatable PFD satisfy the USCG carriage requirement?

Are there any serviceable condition requirements for the inflatable PFDs?

In addition to the requirements stated in 33CFR175.23 for inherently buoyant PFDs, the inflatable PFD must have a functional inflation mechanism-arming indicator. The air chambers, oral inflation tube, and manual inflation lanyard must also be in serviceable condition.