by Chris Riley Updated on June 12, 2021. In nauticalknowhow 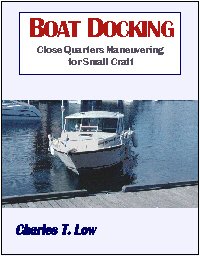 “Keeping station” refers to holding a position in the water – not moving relative to the land – and here we’re talking about staying still without being secured to a dock or anchored to the bottom. We hold the boat in place by piloting it at (not “to”) a certain spot without making any “way”, and unless there is absolutely no wind or current, station keeping requires very active and positive control of your vessel.

It’s a little bit like balancing a pencil on its tip, or like hovering a helicopter – much more difficult than just moving the thing somewhere! As such, it ranks right up there in the advanced category of close quarters maneuvering skills, and makes a very good exercise for familiarizing yourself with your boat’s slow speed handling characteristics.

Why it presents such a challenge will become apparent as we go along. But first, consider why to bother with station keeping in the first place. Any number of scenarios can present themselves. Commonly, you need to wait for someone else to clear a slip, or just for other boats to get out of your way, before you proceed along the next leg through the marina to or from your dock. You may need to stop and talk to someone on shore. You may be involved in search and rescue, in which case there are many times when the helmsman’s job is just to hold still (and often, under these circumstances, it’s in a storm, at night, nearby to rocks and other vessels, and with rescuees, rescuers and debris in the water).

Even if the conditions are extremely calm, remember that you are still considered to be “under way” (albeit with “no way on”), and are responsible for the handling of your boat. Keep a close watch all about you, and be prepared to get moving promptly should circumstances so dictate. Bear in mind that a boat which appears to be motionless second by second still may stray quite far minute by minute. My personal preference is to remain very close to the helm, and to leave the engine running.

There will be other times when the conditions are active enough that keeping station will not be practical. In heavy weather, even if you can’t control the boat enough to hold it still, you can probably keep circling or doing figures of eight. If there’s not enough room to do even that, then you likely shouldn’t be there at all anyway

Station keeping rule number one and only

Stay aligned with the wind. (Or, stay aligned with the current, and if there are both then figure out the best compromise.) The wind will try to slide a boat sideways in the water, not only pushing it along but also yawing it broadside. The boat’s propulsion is only fore and aft, so the only way to maintain control of your vessel is to keep yourself lined up with the wind.

The wind will constantly try to blow the bow off to one side or the other. Once out of alignment, you might think, you will simply steer yourself back onto your desired heading. “Simply”, however, is not quite the right word, because once you begin to turn off the wind the whole side of the boat becomes an inclined plane. Now the moving air mass not only pushes it down wind, but laterally too!

It gets worse. Let’s say that you’re starting off head to wind, and the wind has you yawing clockwise (viewed from above). The boat now is not only being pushed astern but also to starboard. Clearly, you apply forward propulsion and steer to port. However, at first, the thrust of the propeller’s discharge current also pushes the boat further to starboard.

This dilemma, of what amounts to very sensitive steering when head to wind at slow speeds, is never more apparent than when the speed is so slow that it’s zero. About all you can do about it, when keeping station, is to pay attention and catch any yawing early. With practice, most of us will be able to hold our boats almost directly into the wind for as long as we care to. It may however, require us to be in forward gear much of the time.

This is fine except that now, in forward gear for much of the time, we begin to make headway. Making headway is not keeping station, and this is why I made the implication earlier that in really heavy weather we had better leave station keeping to those who have received extensive professional training in specially designed craft. In moderate winds, however, the remedy is to pop into and out of forward gear, just enough to maintain alignment without starting to move appreciably forward through the water. (The vagaries of steerage in reverse gear preclude its use, when head to wind, except for light airs and the most benign of boats.)

Doing this well requires experience. Your reflexes have to be sharp, and it certainly helps to know your boat well enough to be able to anticipate what it’s going to do next. It’s a matter, as has been said in this space often before, of honing the “timing, vigor and duration” of the various control inputs. It connotes having a feel for your boat, and while reading about it here surely can accelerate your progress and focus your thoughts, there is no way to get that feel except by practicing and rehearsing, out on the water. (There’s nowhere I would rather be, anyway!)

Let’s back up for a moment. Another way around this seeming impasse is to go stern to wind. This won’t work in all boats, because many are simply not adequately steerable in reverse gear, especially with no way on. Because of this, the default technique remains head to wind. But for those boats which can steer well enough in reverse (more likely an outboard or an I/O than a straight-shaft inboard), there are at least two advantages. First is that the propulsive force of the propeller’s discharge current is often considerably weaker in reverse gear than in forward. Thus, you will likely make less sternway against the wind than you would make headway in forward gear. So, you can stay in reverse gear more of the time, using it to steer (if that works in your boat).

Secondly, in reverse gear the vessel’s pivot point moves aft. So, even though the wind still and always exerts a yawing force on the boat, attempting to put it broadside to the direction of air flow, this will be mitigated to some extent, in reverse gear, by the aft-displaced pivot point, which lets the bow tend more to weathervane down wind. The swiveling discharge current, as you steer, also pulls the boat back on course, rather than pushing it off as was described above for forward gear. We’re no longer so much balancing a pencil from the bottom as hanging it from the top. In short, given the right boat, steering may be easier stern to wind.

Don’t change that station! Station keeping is another one of those many close quarters maneuvering topics in which absolutely everything you know about slow speed boat handling comes into play and contributes to your successful piloting. There is much more to know than can possibly be presented here, so consider purchasing Boat Docking .

Close quarters maneuvering is about always improving, and this applies to station keeping just as much as, if not more than, to other boat handling skills. This is no place for coasting! As such, one of the very best indicators of your progress is your ability to make your boat just hold still.