It’s no secret that a spinning reel is one of the most versatile fishing tools that exist and is considerably easier to use than the baitcasting counterparts. With spinning equipment, introducing line twists as you spool up a reel is a walk in the park.

Whether you need to restring your fishing reel or your line is worn out, you just bought a new spinning reel, or want to change your fishing line, knowing how to put a fishing line on a reel is a basic technique every fisherman should master. In this comprehensive step-by-step guide, we’ll teach you how to, and in the end, you’ll see that spooling a reel is a breeze.

It’s worth noting that if you’re spooling a medium-sized spinning reel and your style of fishing demands anything that exceeds 12 pounds, we recommend using a braid.

If you settle for a braid, first lay a bit of monofilament (mono) on the spool as backing. Doing so curbs the braid from slipping on the spool. Then, you can use a Uni Knot to attach the braid to the mono.

While the braid-line is considerably pricier than a mono-line, it’ll allow you to not only cast further but also more accurately. Furthermore, it’ll give you a more direct connection to the fish and your bait. Its material is also more durable and sturdier compared to a mono-line, which means you don’t need to replace it as frequently.

Although putting mono backing on the braid to use less of it will save you a few extra bucks, if you’re targeting fish such as King Mackerel that take long runs, you’ll need all the lines you can get. If that’s the case, spooling with all braided lines is your best bet.

Before you can learn how to put a fishing line on a reel like a pro, here’s a list of the items you’ll require. 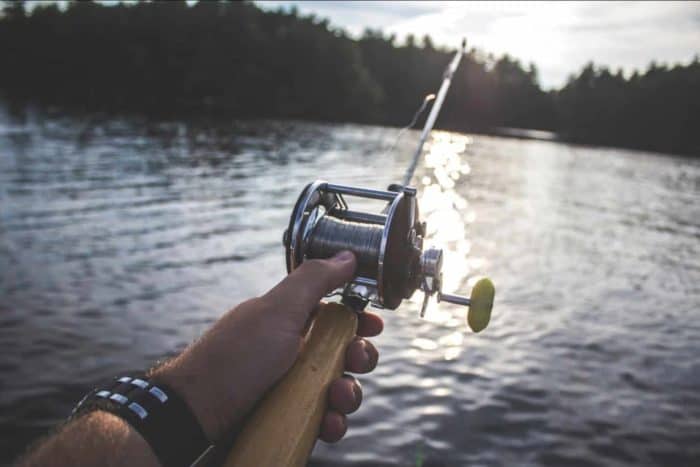 Below are the step-by-step instructions on how to put a fishing line on a reel. While having another person around can make the process easier, you’ll need to know how to do it alone. Therefore, we’ve focused on providing steps on loading a spinning reel without the presence of someone else.

Begin by assembling your rod and ensuring all the eyes line up, the same way you would if you were setting up for fishing. Then, grab your spinning reel, jerk it in the reel seat and tighten it until the spinning reel is secure.

Remember to check the direction the reel turns upon cranking it. Ensure you mirror how the two spools begin to unwind. The line should unwind off of one spool in the same direction that’s it winding onto the other.

For the line to be spooled onto the reel more uniformly along with curbing line twists, match the direction of the reel and line.

Grab your line, regardless of whether it is mono or braid and, slowly take it out of the spool. To prevent any line tangles or twists, remove up to 15 feet of line from the spool. If you’re putting a monofilament backing onto the reel, you’ll first use the mono then later attach the braid.

Once you get the line, the next course of action is to thread it through your rod’s eyes, starting at the top and ending at the reel.

Remembering to open the bail is an important step. You’d be surprised to learn how often people forget to do so. It’s only after carefully attaching the line to the spool that they realize the bail won’t pick it up, and then, it’s back to this step. Save yourself the hassle by opening the bail arm of the spinning reel and making sure it remains open as you tie the knot of the line to the spool.

Step 5: Attach the Line to the Reel Spoon

Tying the line to a reel is straightforward. Simply wrap the line twice around the reel spool and secure it with an overhand knot. Then, closely trim the tag end.

If you’re restringing the reel as a result of the current line being worn out, you may decide to leave a portion of the old line on the reel to serve as backing.

Choosing to do so means connecting the old line with the new one via a Uni knot. It’s this tip that will save you a few extra bucks when you reline your reel as less line is needed to fill the spool.

Step 6: Slowly Begin Winding the Line Onto the Reel

Hold the spool and screwdriver in one hand. Using your free hand, take the thick cloth and use it to grip the other side of the spool. Now, put pressure on the spool to ensure that when you wind, the line tightly goes on the reel. Doing so will result in the cloth getting hot when you start going, so pause during the process, as need be.

Step 7: Slowly Wind the Line Onto the Reel

It’s time to flip the bail closed as you slowly start turning the handle. While cranking, the spinning bail will lay the line onto the reel spool in uniform wraps. After a few cranks, it’s time to stop, as it’s time for the most crucial step, making sure the line spool faces the right direction.

There are three ways of orienting the line spool: one is right, and the other two lead to line twists. For starters, avoid running the line straight off the spool as you would when you spool a baitcaster that also prevents backlash from occurring. It must come off with the face of the spool pointing in your direction.

When it comes to putting the line on a reel, there’s debate about whether the line should come off counterclockwise or clockwise. Given that this dilemma is just as confusing to remember as it is to describe, here’s a trick that will give you clarity.

Stand up and hold the rod in a way that it is parallel to the floor. Then, position the line spool on the ground, right ahead of you, with the label facing the floor or in your direction. As you put a tad bit of tension on the line using your hand, begin cranking the reel.

After a maximum of 10 cranks, that’s your cue to watch the line right next to the spool on the floor while lowering the rod to permit slack.

Now, here’s your moment of truth whereby a couple of things will capture your attention. For starters, you’ll notice the loose line laying on the floor in pleasant, relaxed loops.

Secondly, you’ll see the loops twisting over onto themselves into coils that look quite contrary from relaxed. The goal is to see relaxed coils. Therefore, if you notice anything other than that, you’ll need to flip the spool over and repeat the process.

The take-home of this step is, after cranking about ten times and noticing loose, relaxed coils on the floor, you know it was a success, and you can proceed to the next step. You won’t need to un-spool the line to rectify the twists that go in there. After all, they’ll be so deep in the spool that it won’t matter.

Step 9: Keep Cranking Until You Fill the Spool

At this step, fill the reel with the line. Stand up, face the spool on the floor, hold the rod parallel, and put a bit of elbow grease on the line.

Therefore, grab it between the reels and slowly begin cranking. Pick up the pace and carry on until you notice the line coming within 3/16 and 1/8 of an inch from the spool’s lip. You can now clip the line and thread it through the rest of the rod guides while tying on a lure.