How do Boats Float?

A boat, or any other object designed to float, is based on a theory by a very old guy, even older than Capt. Matt. Though he is old and, by the way, dead, he was really a cool guy and his name was Archimedes (Ark-i’-meed-eez). His principle, cleverly named the Archimedes’ Principle, explains how things float. If you fill your bathtub with water, what happens when you get in? The water rises, right? (And sometimes goes over the side.) That is because you “displaced” some of the water with your body and it had to go somewhere. The key to floating is that the object must displace an amount of water which is equal to its own weight.

Why Do Boats Float?

What Makes A Boat Float Without It Tipping Over?

The principle of floating is pretty easy, however, if you want to remain inside the boat and actually get where you want to go, your boat must have “stability” as well as being able to float. Stability means that it is designed not to tip over easily. That doesn’t mean it won’t ever tip over. 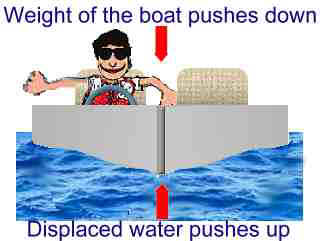 On a large ship, like an ocean liner or tanker, the movement of one person doesn’t affect the stability of the ship because it was designed to safely carry lots of weight. But on a small boat, like a fishing boat, your weight and the weight of your gear (and where you put it) has an effect on the stability of the boat 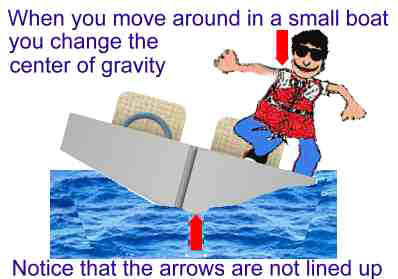 A boat is said to “heel” (no not the one on your foot) when it leans over to one side. This is why you never want to sit or step onto the side of a boat. Your weight could make it “heel” too much and it may tip over. You should also balance the weight of all the stuff you bring with you. In a small boat, you and your gear should always stay low and to the center of the boat. When getting into a small boat, always try to step into the center and keep “one hand for yourself and one for the boat.” 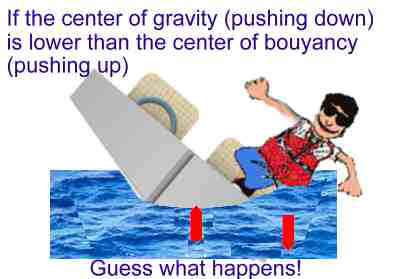 Of course, because you have on your PFD and are displacing enough water to float, you would be okay, just a little wet and cold. If this should ever happen to you and you can’t right the boat (turn it back over), stay with the boat, blow your whistle or yell for help. So . . . the next time someone says “Whatever floats your boat” tell them about Archimedes and stability and why it’s a very good idea to always wear your life jacket!

How do you make a boat float better?

A hull’s shape can help a boat displace more water and fill the gap made with air, which has a smaller density than water. Different hull shapes affect water and buoyancy differently. Deeper hulls can create more stability, but shallower ones may carry more weight. It’s might seem confusing, but a little experiment that you can do at home should help explain things better.

Fill up a container with water and grab some aluminum kitchen foil.

Using 12” x 12” squares of foil, try constructing small boats that can transport pennies. Try and see how many pennies you can fit on your boat before it sinks!

We recommend that you try and construct a number of little boats in different shapes and sizes. The results might surprise you.

But if you want to cheat, we’ll let you in on a secret: boats with a wide flat bottom generally work the best for carrying heavy loads!

That’s why barges are wide, long, and flat: they can carry supremely heavy loads. However, carrying the heaviest weight isn’t always important. If you try splashing your flat boat and make waves in your water container, you’ll see that it doesn’t take much to sink your flat bottom barge. And that’s where ships with deep keels come in.

A deep keel can make a ship more stable in rough conditions. Next, try constructing a foil boat that won’t sink no matter how much you shake your container or splash it.

We won’t spoil the results for you this time, but we’re eager to hear about your findings!

Give it a go, and see if you can work out how to make a boat float better by conducting this little home experiment.

If you want to learn more about floatation, make sure you keep some of these important terms in mind! Understanding these ideas will make learning about floatation and boating much, much easier in future.

Buoyancy is a term that describes an upward force that opposes the weight of an object placed in water. It doesn’t just have to be water-based either, as buoyancy can also refer to objects floating on air. Buoyancy can also be referred to as “thrust.”

The term “density” is used to describe how much mass an object has. In real science-y terms, density is a measure of the degree of compactness that substance has. In basic boating terms: as long as your boat has a lighter density than the water below it, you’ll float!

Displacement is a word that means moving something from one place to another. In nautical terms, it refers to the amount of water mass moved because an object has taken its place. Think about an ice cube in your drink. When you put an ice cube into your drink it makes the level rise because the ice has displaced the liquid, and the drink has to move to accommodate it.

Pressure can also be used when folks talk about the science behind floating. Pressure is the continual physical force that occurs when one object comes in contact with another. Specifically, it’s the measure of the force used when distributed over a surface area.

You’ve seen the term “upward force” used a lot here. Buoyancy and upthrust are examples of upward forces, since they act in an upwards direction. Even gravity, which would seem like a downward force, can also be described as an upward force.

In Summary: How Do Ships Float?

They float thanks to the displacement of water and the resulting upward force created by that displacement. Since a boat’s density is much lighter than the ocean’s density, a little upward force is all it takes to stay floating. Even for the heaviest of ships! And that’s how you float a boat!