by Chris Riley Updated on July 29, 2019. In nauticalknowhow

This is the first of a new generation of emergency beacons. GPIRBs (Global Position Indicating Radio Beacon) combine the latest in GPS and 406MHz EPIRB (Electronic Position Indicating Radio Beacon) technology, and add extraordinary precision to your emergency distress signal. If you are a boater who operates offshore or in the Great Lakes, this could be the best “life insurance” policy you could own. 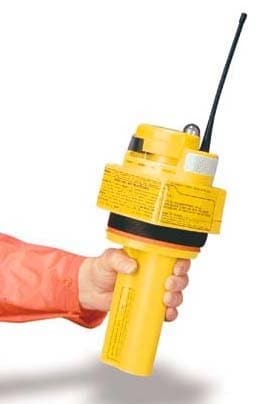 The GPIRB, with its built in GPS, determines and broadcasts its own location. This shortens the time required to get an accurate fix on the beacon location and saves valuable time at the beginning of an SAR (Search And Rescue) operation.

The unit comes with a float-free bracket that releases it if it is submersed as in a sinking. There is a manual mode to turn the unit on manually and a test mode which should be used on a frequent basis to test the operation. It has a minimum 48 hours operating life, 8-channel internal GPS and comes with a lithium battery.

What’s the difference between 406MHz EPIRBs and the new GPIRB?

The position of a 406 MHz EPIRB is determined by calculations using the Doppler shift in the beacon’s distress signal which occurs as satellites approach and recede in overhead orbits. The accuracy of the calculations is determined by the number of signal bursts received by the satellites. Accuracy is enhanced when a satellite passes directly overhead, because the satellite receives the greatest number of signal bursts. The only real problem with the system is that it takes time for an accurate fix to be acquired.

In contrast, the new GPIRB takes an active role in determining its own position. When activated, its internal GPS finds its own position, just like an onboard GPS. Having located itself, it broadcasts its identity and position on 406MHz. It will then shut down for 20 minutes to conserve power, and repeat the process of locating itself and rebroadcasting. It will continue to update its position every 20 minutes as long as it is active. The advantage of a GPIRB is that an accurate fix is almost instantly available. Its frequent update allows rescuers to compute drift accurately, and direct SAR teams directly to you — difficult to do with the time delays of an EPIRB.