All About Fuel and Your Boat

by Chris Riley Updated on January 3, 2021. In nauticalknowhow

How much do you need?

How much fuel you need to carry depends on the design of your boat and the intended use. In a sailing vessel, for instance, a 50 gallon tank of diesel feeding a 25 hp auxiliary engine cursing at 80 percent of top speed could propel a 33 foot sailboat 300 miles at 7 knots in calm weather.

That same amount of fuel would take a twin engine 40 foot sportfisher only about 33 miles at 40 knots. This boat would need 450 gallons to cover 300 miles at that speed.

Planing hulls need much more power than displacement hulls and use more fuel per mile. However their ability to carry fuel is limited because their planing ability is affected by weight.

Many naval architects build in as little tankage as possible taking into consideration the design of the boat, reasonable usage and the distance between refueling stops in and around its normal area of operation.

How much does it weigh?

Where does it go when it is consumed?

Your engine uses the fuel you purchase in several ways.

This leaves about 13-14 percent of the original energy to turn the propeller.

How much do gasoline and diesel engines consume?

Diesel engines consume about 1 gallon per hour for every 18 hp used. You can estimate the number of gallons consumed per hour by multiplying horsepower used by 0.055.

Note: An engine at cruising speed usually uses only about two-thirds of its maximum available horsepower. Most marine engines are designed to run continuously at between 60 and 75 percent of maximum speed. Diesels tend to be more toward the top of the range.

Gasoline four stroke inboard engines need about 1 gallon per hour for every 10 hp used. The number of gallons consumed per hour can be estimated by multiplying horsepower used by 0.100. (see note above)

Outboards might use considerably more since two stroke motors seem to have a greater thirst than four stroke motors.

What about fuel economy?

Any attempt to force a displacement hull beyond its maximum theoretical hull speed brings exponentially higher fuel consumption for minimal gain in speed. On the other hand, slowing down a little almost always is rewarded by gains in economy, and thus range. This same principle applies to high-speed planing hulls as well but only up to the point at which they start to come off plane. Once off plane they tend to lose efficiency.

How about fuel reserves?

Use the old rule of thumb; Use one-third of the fuel in your tank to get there, one-third to get back and save the last third as an emergency backup. 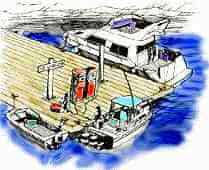 Proper fueling procedures are very important in preventing onboard fires. Gasoline vapors are heavier than air and can spread rapidly into enclosed spaces. You should check the bilges and all closed compartments for gasoline vapors. The sniff test is the most effective method for detecting fuel leaks.

Tip: Always use the ‘one-third rule’: one-third of your fuel to get out, one-third to get back, and one-third in reserve.

It is not uncommon to see a small fuel sheen on the water surface near boats. Although it may only be a tiny amount from some boats, the cumulative impacts can be damaging to marine life. Once in the marine environment, oils and fuels have a tendency to accumulate in bottom sediments and concentrate in marine organisms. These harmful substances commonly enter the marine environment through bilge pumping or fueling. Don’t add to the problem by overfilling your tanks.