Tackle boxes are a great way to keep all of your fishing gear organized, especially if you are one of those anglers who enjoy trying a little bit of everything if nothing seems to be going right.

Tackle boxes have changed over the years. They used to be plastic with open, unorganizable compartments, but now they have transformed into organizational storage boxes for tackle of all shapes and sizes.

About the Flambeau Classic Tackle Box

The biggest change to their classic line was the introduction to more than one tray. The standard box ranging from 1 to 3 trays. Although larger, the outside appeared the same, but when you opened the unit to move the tray, you could be opening a two-tier or three-tiered variation of that same classic box.

Why It Stands Out

In the modern version of the Flambeau classic tray tackle box, the lids have an added flip top storage to expand even further. Somehow as anglers, we add more and more to our tackle boxes, so we are prepared for whatever we may face on or near the water, so Flambeau tried to stay ahead of that curve. If three trays and a flip-top storage lid weren’t quite enough, Flambeau had an answer for that and came out with their largest capacity version of their classic box.

About the Flambeau Hip Roof 7-Tray

The Flambeau Hip Roof 7-Tray is also known as the big box, and it has 7 trays, 61 compartments, and even two cup holders built into the lid for when closed.

The major change for this model from the classic is that the classic had a clam style opening where the Hip Roof has an interlocking tongue-and-groove style closure that meets in the top center of the unit.

Why It Stands Out

The Flambeau Hip Roof 7-Tray stands out because of its hip roof design that allows for extra storage. The large capacity and compartments hold seven different trays with 61 total compartments. This is the tackle box you would want to choose if you like to carry different options each time you’re on the water.

Features and Benefits of Choosing a Flambeau Tackle Box

There are many features and benefits of choosing a Flambeau tackle box. Number of compartments, number of trays, and removable dividers to change the size of the compartments.

The number of compartments that your Flambeau tackle box has is important because it will give you more opportunities to store tackle of all different shapes and sizes. 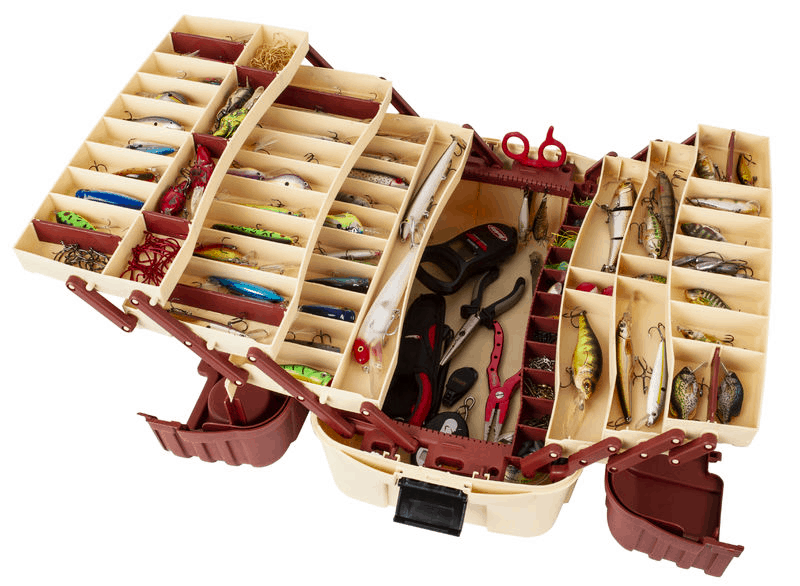 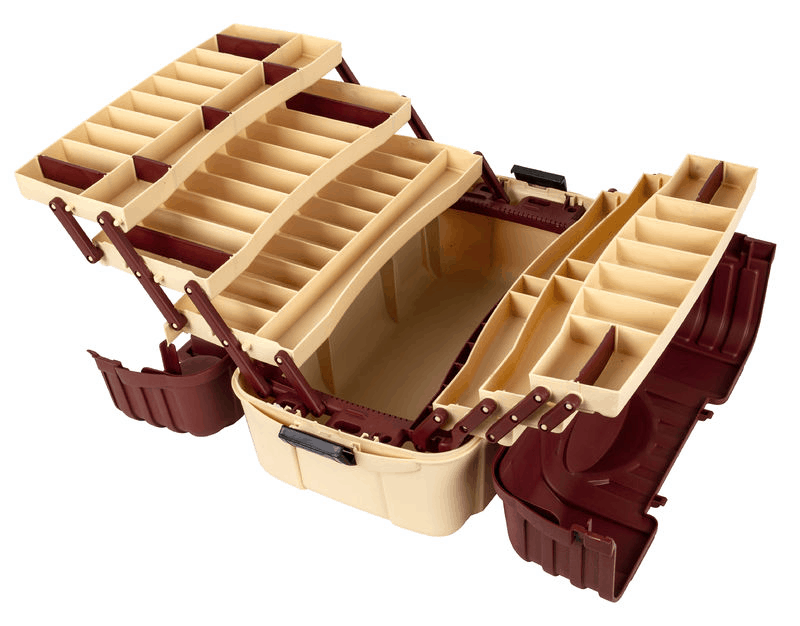 Finally, the last feature of the Flambeau tackle box comes from the Classic Tackle Box option. It has removable dividers that you can use to change the size of the compartments to match the tackle you have. 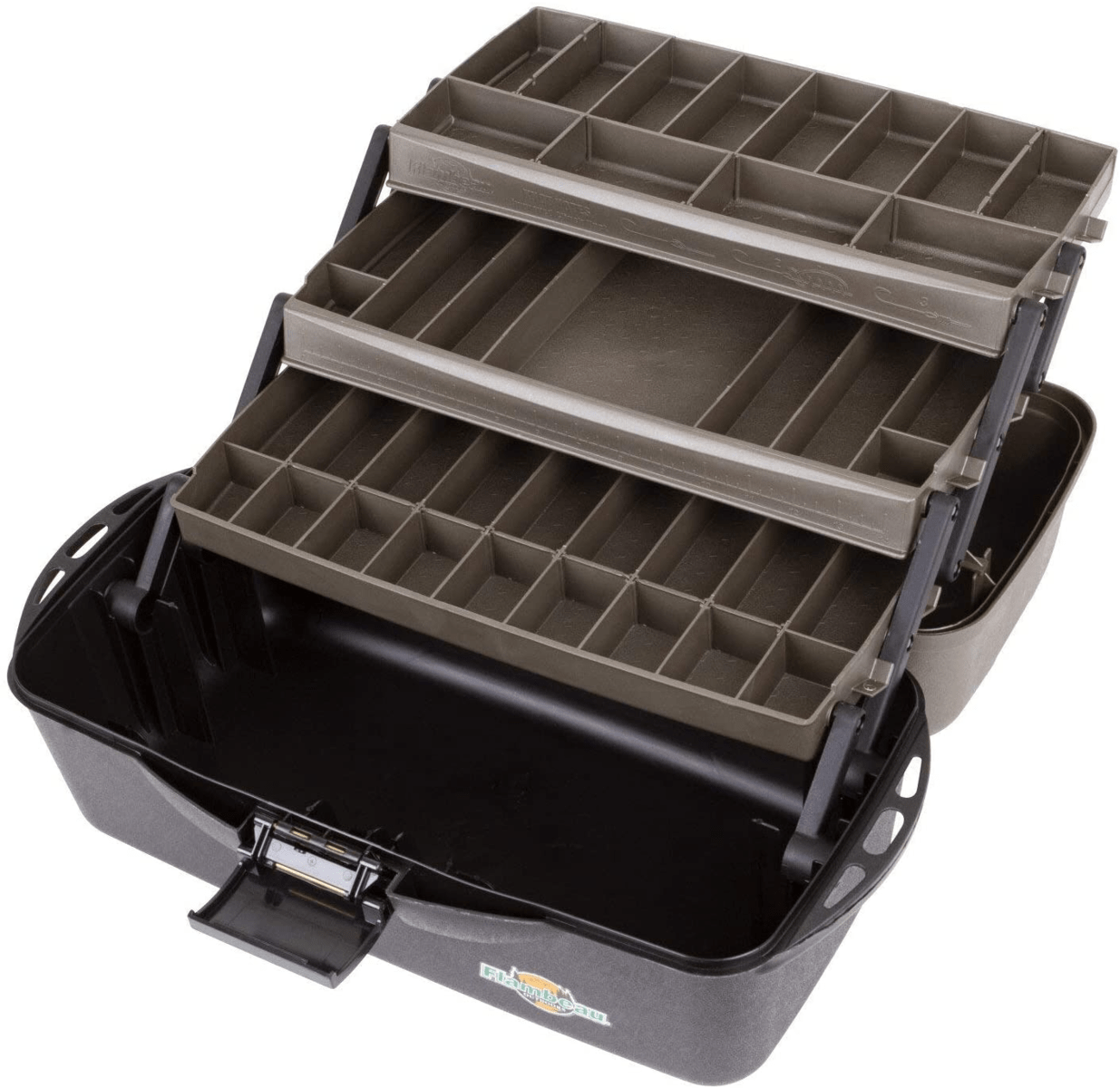 The History of Flambeau

Flambeau has been in the business of tackle storage since 1947, providing anglers ample storage for their fishing gear with their classic tackle box.

The classic tackle box is what many anglers remember their father or grandfather carrying down to the lake or out iron their boat from their childhood.

Initially, this classic tackle box was just a plastic box with a small tray that lifted to display the contents underneath the tray. This product, which was proudly made in the USA, has been the standard for years and years.

Flambeau’s tackle storage continues to be one of the most utilized brands of fishing gear because the product they make excels. They have had so much success in their respective markets that they have had the privilege of working with Mike Iaconelli. He is one of the world’s greatest bass fishermen. Together, they have won tournaments like the Bassmaster Classic. Mike, also known as “IKE,” has even helped design some of the fishing gear that Flambeau produces with his feedback on what is needed from a true angler.

Flambeau has taken years and years of knowledge and tested to bring fishing gear to users of all ages and expertise and continues to do so at a competitive price with a quality product that can stand up to the test of time. Flambeau tackle boxes can be purchased online or at many local retailers all across the U.S.A.

Flambeau tackle boxes come in various other models not following their early predecessors to meet any anglers’ needs, so take a look at their website and see which Flambeau Tackle Box is right for you!