Dugong vs Manatee – What’s the Difference?

In 1493, the explorer, Christopher Columbus, wrote in his journal that he has quite clearly seen three “mermaids” rise out of the sea. His issue was that these mermaids weren’t quite as beautiful as folklore seemed to portray them.

According to his account, the mermaids he saw had some “masculine traits on their faces.” Turns out, like almost every other sailor in that time, Christopher Columbus understandably mistook either a dugong or a manatee for mermaids.

In fact, it’s this confusion that led to the origin of the “Sirenia,” the animal order to which dugongs and manatees belong. In many cultures worldwide, the word “siren” is associated with mermaids, mythical creatures of the sea.

Unfortunately, the Stellar’s sea cow was hunted to extinction sometime in the 18th century. At first glance, these two animals have very similar physical traits and can easily be mistaken for one another.

However, that doesn’t mean that they are the same thing with different names; they are very different animals, and it shows in their behavior, biology, and even their choice of habitat.

Let’s start with the most obvious differences in their physique. The problem here is that both dugongs and manatees look very similar; they are both quite big and look like cows – that’s why they are often referred to as the “cows of the sea.”

However, if you take the time to look closely at both these animals, you will notice a few distinct differences that set them apart. The most obvious differences are in the structures of their snouts and their tails.

This is yet another huge difference between these two animals. On the one hand, dugongs love saltwater, and they never leave it. A dugong’s entire life is spending in coastal waters. They prefer living in shallow bay areas and even mangrove swamps.

On the other hand, manatees don’t have that much of an attachment to saltwater and tend to roam between both fresh and saltwater. Even though the West African and West Indian Manatee primarily reside in saltwater, they migrate to warmer freshwater areas during winter. The Amazonian manatee, however, doesn’t migrate and lives only in freshwater.

While both these animals tend to be solitary creatures, they have extremely different approaches when it comes to mating. Dugongs tend to have only one mate for life. They remain a couple for the entirety of their existence, and the females begin giving birth when they are around ten years old. They continue to give birth every three to five years.

Manatees, on the other hand, believe in polygamy. A mature male manatee will have numerous female partners. These females begin to give birth when they are around three years old and continue to do so every two to three years. 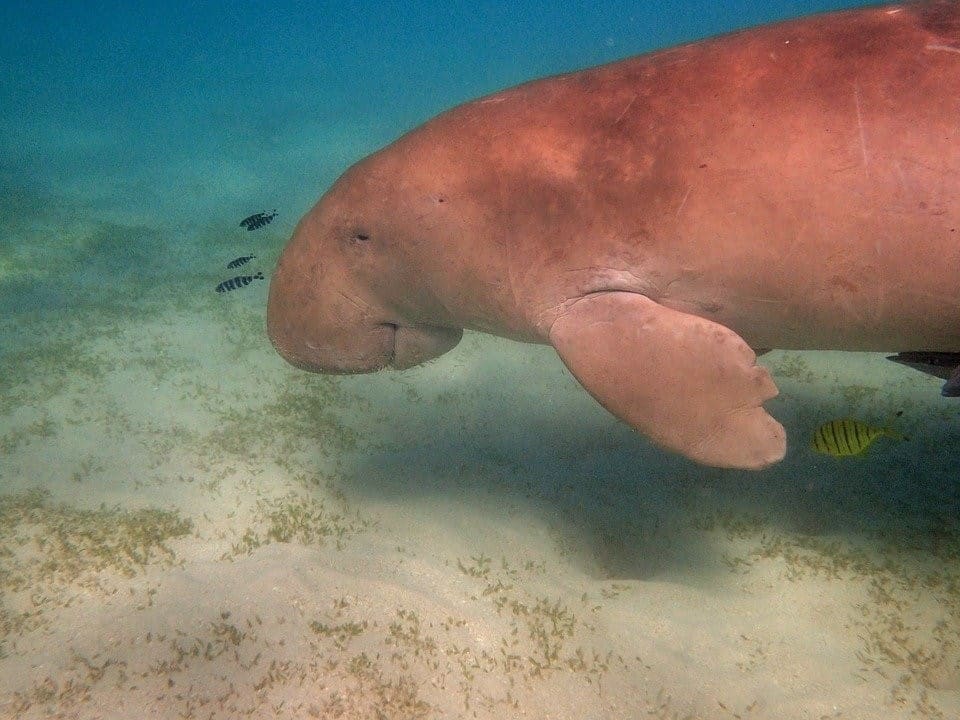 Basic Facts About Manatees and Dugongs

As already mentioned, manatees live in marshy, shallow areas in the Caribbean, West Africa, Gulf of Mexico, and the Amazon Basin. Unlike dugongs, who spend all of their lives in saltwater, manatees can migrate to different waters when it suites them. This is because cold water can be rather stressful to these creatures.

Manatees travel to warmer waters when the average temperature of their current waters drops below 20°C/68°F. They will seek warmer waters everywhere, including in power plant overflows or natural springs.

Both manatees and dugongs are big, heavy creatures. Manatees, in particular, can grow to 3.6 meters (11.8 ft.) long and weigh anywhere from 200 to 600 kg (440 to 1300 lbs.). They are vegetarians that survive primarily on plants found in shallow waters such as mangroves, seagrass, and even algae.

The largest of all these creatures is the Florida Manatee, which is a subspecies of the West Indian manatee. This particular type of manatee can grow up to 4 meters (13 feet) and weigh up to 1590 kg (3500 lbs.).

Compared to almost every other marine animal, manatees might seem quite slow and docile, with a cruising speed of about 8 km/5 miles per hour and a top speed of 24 km/15 miles per hour for very short distances. While that might sound very slow, the average human can reach a top swimming speed of 6 km/3.7 mph.

Since manatees and dugongs are marine mammals, they need to come to the surface to breathe from time to time. When at rest, manatees can stay underwater for up to 15 minutes. However, when they are active, they need to come up for air every three minutes or so.

Dugongs live only in warm salt water and can be found in the waters of East Africa to Australia. They have a very long lifespan and can live up to 70 years old, which is nearly twice as long as the average manatee can live. Dugongs grow up to 3 meters (10 feet) and can weigh up to 230 to 500 kgs (510 to 1000 lbs.).

One fun fact about both these creatures is that while they might both be marine mammals, they are more closely related to elephants than they are related to whales or dolphins despite looking quite a bit like the latter. On the surface, dugongs and manatees look quite similar, but as you can see, they are quite different from one another. 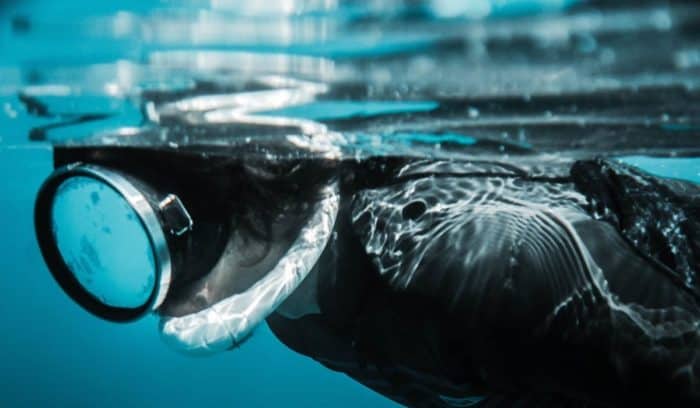 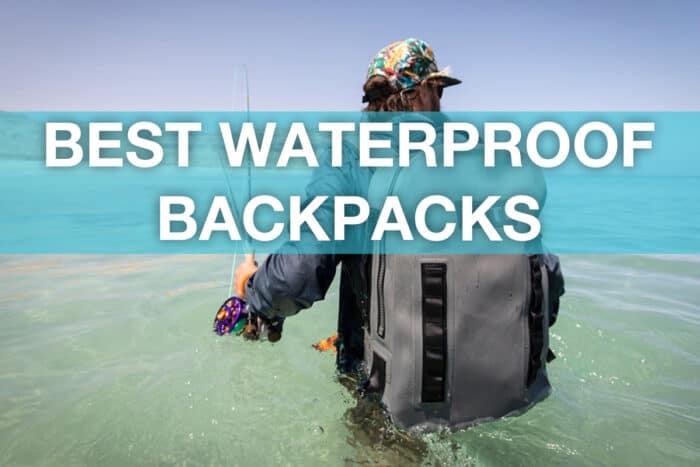 Reviewing The 10 Best Waterproof Backpacks of 2022 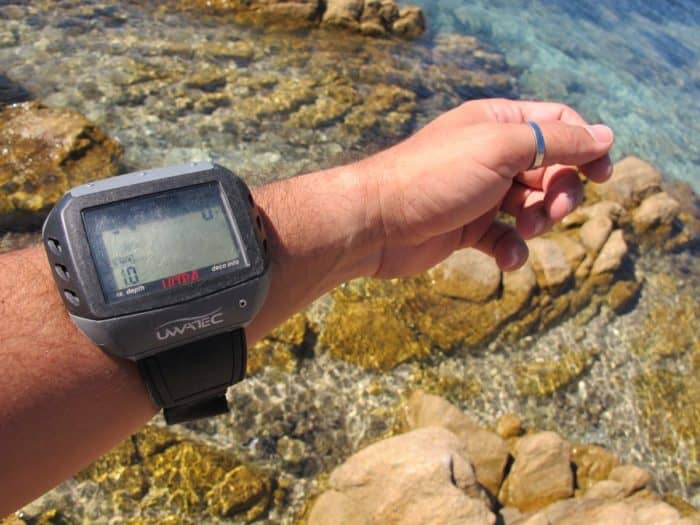 How to Use a Dive Computer 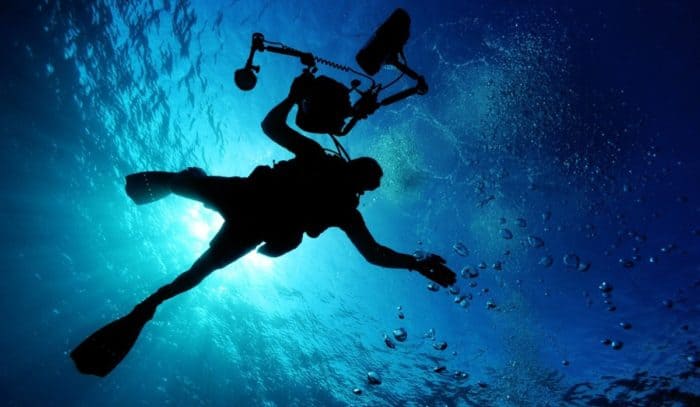