by Chris Riley Updated on April 29, 2022. In nauticalknowhow 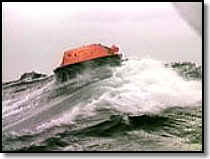 While it may come as a surprise to some, by now most boaters realize that the survival equipment stocked in most life rafts, even rafts designed to meet SOLAS requirements, is often inadequate, sometimes woefully so. In many cases not only is the selection and quantity a problem, but the quality of the equipment and supplies is also less than desirable.

Most responsible mariners also stock an Abandon Ship Bag (also called a “ditch bag”, “ditch kit”, “grab bag”, or “flee bag”) with additional emergency supplies to take along in case of an abandonment. The question of what supplies to place in the bag provides plenty of stimulating discussion among sailors and boat owners. How much do you really need is always an interesting topic.

One subject that is inescapable and always controversial is “cost.” Like in most things, assembling a well-equipped Abandon Ship Bag is not cheap. Equipped To Survive’s list was not put together with cost being a determinant. It is not for me to decide what level of expense is suitable for you or where to spend and where to save. Only you can set the value of your life and the lives of your crew and passengers within the scope of your financial limits, a compromise virtually all of us must make.

What’s What and Why

The scope and quantities of items in this, and most such lists, are based on blue water cruising, the ultimate on-your-own experience, where the possibility exists for an extended stay in the life raft if things should go seriously wrong. The quantities of some items may be reduced somewhat, or eliminated entirely, for coastal use or island hopping in heavily traveled and patrolled waters.

In these circumstances you can shed things that are obviously geared towards longer term survival situations, such as food and fishing gear, for example. You may be able to get by with fewer repair clamps, if you have reasonable expectation of a quick rescue, as another example. In part, these compromises depend on whether you have a 406MHz EPIRB and back-up hand-held VHF or EPIRB. Close in to shore, reliable and effective communications will substitute for a huge amount of additional gear. Surviving is nice, but getting rescued as quickly as possible is the ultimate aim.

When considering the quantities in any such list, consider whether they include what is already part of the life raft’s equipment and survival supplies. However, in some cases the quality of those included items is so poor as to make them irrelevant, so it is important to identify not just what has been packed in the raft generically, but exactly what is in there. 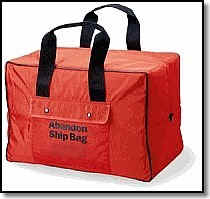 Be sure to carefully examine and test everything you plan to use in an emergency. This ensures you know how to operate the equipment and that it is functioning. Testing is absolutely critical for electronic and mechanical equipment. It isn’t pretty when you’ve abandoned ship and your radio or EPIRB or watermaker doesn’t work. It’s happened. I’ve spoken to the survivors, they were not very pleased, but they have only themselves to blame for not testing first. I’ve seen failures myself in testing. Never rely on mechanical or electronic equipment you haven’t tested yourself before packing.

ALL equipment must be fitted with a lanyard , wrist or tether as appropriate. You can’t afford to lose anything! Neptune has a seemingly insatiable appetite for your most precious, irreplaceable pieces of survival equipment and supplies. Let him feed off someone else. Everything in the life raft should be secured at all times, either by a lanyard or inside a sealed bag that is securely attached to the raft (“secure” is the watchword!). Neck or wrist lanyards should include a means of adjustment so they can be made tight and secure. If left loose, they can still too easily slip off and the equipment is lost (been there, done that). A useful addition to your equipment list might be a few retractable gear attachment devices. They ensure that whatever you are using doesn’t drop overboard, is out of the way when not in use, while still allowing you freedom of movement while using it. 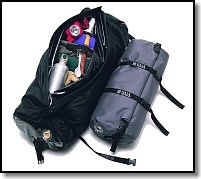 Your abandon ship bag should be waterproof itself to protect its contents in the marine environment. Generally, there will be adequate excess volume, even when loaded, to ensure it floats, if it ends up in the water instead of in the raft. Dry bags are one solution and available in a number of configurations. Another is to use a Pelican Products or Underwater Kinetics case (though these weigh a bit more). There are also commercially produced “abandon ship bags” available from marine equipment suppliers, but with a single exception these are not waterproof, though they do incorporate floatation material. All such storage containers should have a few feet of lanyard attached with a secure snap clip or carabiner at the end to allow you to quickly attach it to your PFD harness or to the raft so that it doesn’t go missing in the chaos that often accompanies an abandonment.

Another good place to store some of this “extra” or replacement equipment or supplies is in the life raft itself, especially life raft specific items. When purchasing a new raft or when having your existing raft serviced, take the opportunity to discuss these options with the manufacturer, dealer, or service center. Some manufacturers welcome the opportunity to help in this manner, other simply have a take-it-or-leave-it attitude. Most service centers are happy to assist. 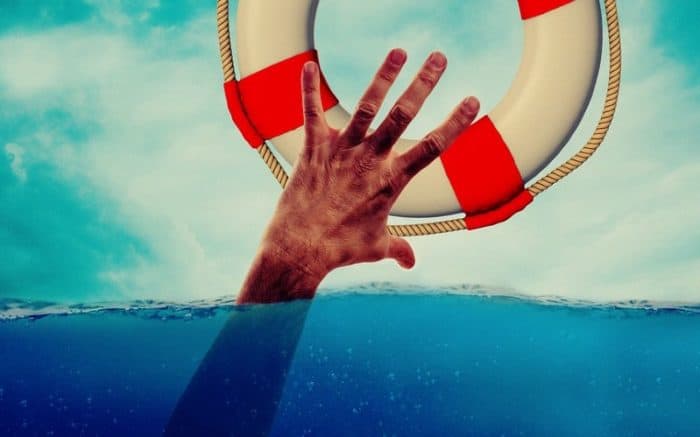 Consider the logistics of an abandonment. Take care that crew members can readily handle the fully loaded bag. Depending upon its size, it’s entirely possible to stuff so much in it that it can unwieldy, or even impossible for some persons of smaller stature to lift. Bear in mind also that you might well have to do so on a wildly rolling, slippery deck in perilous conditions. Often it makes sense to split the load into two containers, especially if you have taken to heart admonishments to be well prepared. In some cases, you won’t be able to fit the bag(s) in the cockpit, the best location, so at least one of multiple bags may have to go below.

If you do have to split stuff up, how do you decide what goes where? Simply split the amounts or prioritize what goes topside and what goes below? I think prioritizing is probably your best bet. Make sure the most critical gear and supplies are readily at hand. What’s most important? Well, that will vary somewhat with the people involved, their capabilities, and where you are. If you compare what the possible consequences of not having something are to other possible inclusions it should become easier to decide, if not exactly easy. Still, lack of some things will surely kill you sooner than lack of others, fresh water vs. food being a prime example.

In any case, no matter how well you stock your abandon ship bag, there are going to be other items which you need to plan to take with you that aren’t in the bag. Being organized and practice are the only defenses when an emergency occurs. Too often there will be little time to prepare and an abandonment will have to be performed post-haste, with no time to spare as water pours in or a fire spreads.

Crew members should be able to locate and retrieve critical items in the dark — no different than a soldier being able to field strip his equipment in the dark. Practice, practice, practice. It should take no longer than 30 second for the crew to collect all the gear and be ready to launch the life raft and abandon ship. If that sounds like it’s not enough time, talk to a few sailors who have seen their boats go under just that quickly. If you have a plan and practice, it is doable with time to spare.

Will most people invest the time and effort? Unfortunately, probably not, but at a minimum you should do a run-through with the crew before getting underway, so at least everyone has some concept of their responsibilities and what needs doing in the unlikely case that it comes to that. It may help to post an abandon ship checklist in a conspicuous place, perhaps in the companionway.

Finally, you should never assume all hands will be available to perform their assigned jobs during the abandonment. Some well-intentioned abandon ship plans fall apart at this point because the developer forgets someone might already have been lost overboard or incapacitated. All crew members should at least be familiar with all that needs to be done and what the priorities are.